The Association Between Social Support Availability and Memory: A Cross-Sectional Analysis of the Canadian Longitudinal Study on Aging 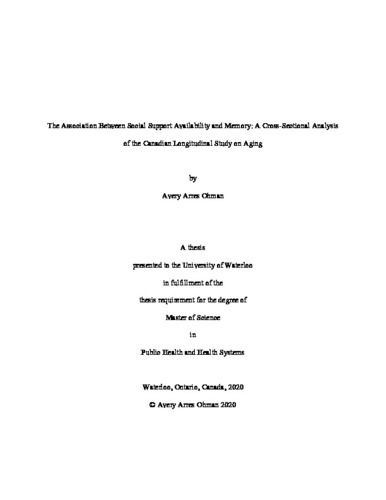 Population aging leads to a rise in the prevalence of age-related cognitive decline. While some declines in the memory domain of cognitive function are expected as people age, deterioration beyond a certain point may reduce functional ability and independence, and increase the risk of dementia. Therefore, it is critical to gain a better understanding of the protective and risk factors for memory function to promote better health throughout the aging process. Social support is a modifiable psychosocial factor that has been shown to be positively associated with the maintenance of cognitive function. However, little evidence on this topic has been gathered from large-scale, population-based studies that include middle- and older-aged adults, leading to a gap in the understanding of the nature of this association. The objective of this study was to investigate the relationship between social support availability (SSA) and memory function using data from the Comprehensive Cohort of the Canadian Longitudinal Study on Aging (CLSA). This thesis used multiple linear regression to explore the association between SSA (measured using the 19-item Medical Outcomes Study-Social Support Survey) and memory (measured using the immediate and delayed recall Rey Auditory Verbal Learning Test), controlling for covariates including sociodemographic factors, health-related factors, depressive symptoms, and health behaviours. Results show that overall, there is a significant positive association between SSA (overall and subtypes) and memory function, both before and after adjusting for covariates. For sex-stratified analyses, stronger associations were typically observed for males compared to females for both immediate and delayed recall. Mixed findings were observed for age group-stratified results, with the strength of association for each age group varying substantially by SSA subtype and trial of the REY test. This research addresses gaps in the literature, building on existing evidence that there is a link between SSA and memory function. Findings help to improve the understanding of the relationship between SSA and memory, and suggests that there are subgroups of the population that may benefit optimally from SSA, thereby supporting the development of social support initiatives to promote healthy cognitive function in Canadians.

Avery Ohman (2020). The Association Between Social Support Availability and Memory: A Cross-Sectional Analysis of the Canadian Longitudinal Study on Aging. UWSpace. http://hdl.handle.net/10012/16002