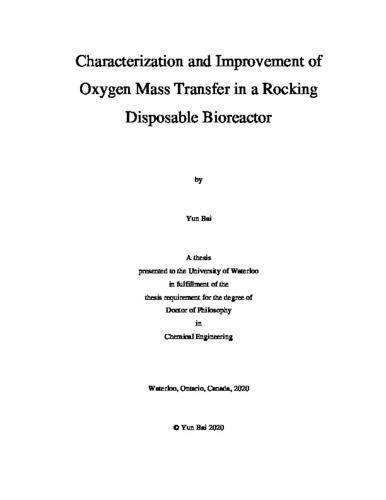 Rocking disposable bioreactors use a cyclic rocking motion to induce mixing and oxygen transfer from the headspace gas into the liquid and are a novel type of bioreactor currently suitable for smaller-scale cell growth. At present they are used primarily for mammalian cell cultures. There are still unresolved knowledge gaps which render the broader applications of rocking disposable bioreactors challenging. These include adequate understanding of the gas-liquid mass transfer mechanism and the lack of quantitative correlations between the mass transfer capacity (to satisfy oxygen demand of a culture) and critical operational parameters, notably for scale-up applications in industry. This knowledge gap creates barriers for rational scale-up and application of these bioreactor systems in industrial biotechnologies. Industry is also interested about the applicability of these bioreactors to aerobic microbial fermentation processes which are faster than mammalian cultures for production of certain biological products. In this work, the oxygen transfer pathways in a rocking disposable bioreactor were analyzed and a semi-empirical correlation for mass transfer coefficient based on a prediction (kLa) model was developed that account for two types of aeration mechanisms, namely surface aeration and aeration via a breaking wave with air entrainment. Experimental kLa data across a range of possible operating conditions (rocking speed, angle, and liquid volume) supported the modelling approach, with most predictions falling within ±20% of experimental data. At low speeds (up to 20 rpm) the surface aeration mechanism was shown to be dominant with a kLa value of around 3.5 h-1, while at high speeds (40 rpm) and angles the breaking wave mechanism contributed up to 91% of the overall kLa (65 h-1). This model provides an improved mechanistic understanding of gas-liquid mass transfer for the operation, scale-up and potential design improvements for rocking bioreactors for aerobic fermentation processes. Secondly, an electrical method was applied for measuring the specific power input into the liquid of the disposable rocking bioreactor at benchtop scales of 10 and 20 L volume capacities. Although power input varied periodically with the rocking motion, the peak power input was shown to be suitable for characterizing the impact of various operational parameters including rocking frequency, rocking angle and liquid volumes. The average power inputs measured in this work ranged from 66.5 W/m^3 to 680.1 W/m^3 which were comparable with power inputs reported in the literature for stirred-tank and orbitally-shaken disposable bioreactors. The kLa was shown to correlate with the peak power input in a power law model, which confirmed that the gas-liquid mass transfer capacity rapidly improved as the power input increased, especially for power inputs of 600 W/m^3 and greater. The correlation between mixing time and power input indicated that a power input greater than 400 W/m^3 was more than enough to induce rapid mixing in the bioreactor. Two potential improvements in the bioreactor design were tested for their capability to enhance the mass transfer capacity of rocking disposable bioreactors. First, an external rod baffle was installed diagonally on the rocking tray aiming to divert the dominant limited unidimensional liquid flow into both longitudinal and horizontal directions. This imposed diversion was shown to be very effective in reducing the mixing time of the bioreactor especially for liquid loadings at 50% of the total bag volume. The kLa however was reduced, especially when the rocking frequency was intensified to 30 and 40 rpm and the rocking angle was increased to 12 degrees This reduction was due to a diminished strength of the waves generated in the bioreactor which impacted the dominant mechanism contributing to the kLa. Secondly, a submerged sintered polyethylene tube sparger was installed into the bioreactor to improve its oxygen gas-liquid mass transfer capacity. The gas flow condition and sparger surface wettability were changed to study the impact of these variables on the sparger performance. The results showed that the sparger could effectively increase the kLa of the bioreactor up to 8-fold when the rocking intensity was low with larger liquid volumes, but the improvements were diminished as the rocking intensity increased. The kLa of the modified bioreactor was observed to depend on the air flow but was not strongly affected by the sparger surface wettability unless the superficial gas velocity was decreased. Based on the progress in this study, future research is recommended for testing the applicability of the derived mass-transfer mechanistic models at larger scales, examining the proposed improvements on various types of cell cultures, especially aerobic microbial fermentations, and combining the modified bioreactor design with other process intensification techniques such as with perfusion and with microcarrier systems.