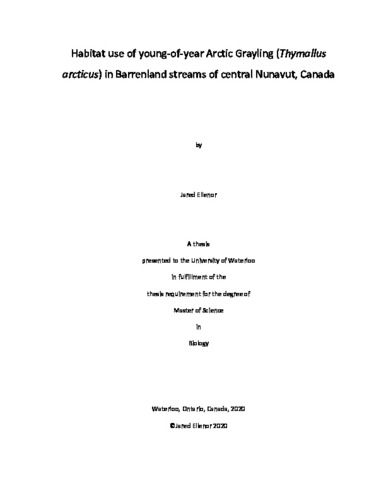 Arctic Grayling, a species within the family Salmonidae that is valued by sport fishers and Indigenous communities, is distributed throughout a diversity of northern landscapes. While Arctic Grayling are known to be sensitive to perturbations in habitat and water quality, our understanding of constraints on their distribution is incomplete, particularly in the vast subarctic Barrenlands region. Understanding the habitat requirements and distribution of Barrenland populations of Arctic Grayling is necessary to develop effective conservation policies, avoid or mitigate potential impacts of mining and other development, and evaluate population distribution trends over time. Barrenland populations of Arctic Grayling rely on seasonally connected networks of lakes and streams to migrate, spawn, and rear. Knowledge of stream conditions and characteristics that are suitable for rearing young-of-year Arctic Grayling is critical for understanding and predicting variability in recruitment, and thus to ensuring the continued persistence of Barrenland populations. In summer 2019, visual surveys assessing the presence/absence of young-of-year Arctic Grayling were conducted at 49 streams in the Barrenlands region near Baker Lake, Nunavut. Occupancy modeling was used to relate a comprehensive suite of stream habitat (e.g., depth, velocity, water temperature) and landscape (e.g., land cover, contributing upstream lake area) variables to the presence/absence of young-of-year Arctic Grayling. Quantification of detection efficiency, and variables that affect detection efficiency, allowed for improved inferences on species-habitat relationships. While detection efficiency was negatively influenced by water depth and water velocity, the best predictors of young-of-year grayling occupancy were the total area of contributing upstream lakes and the landcover (upland/lowland) of the stream basin. These results suggest that the position of streams within Barrenland landscapes is related to reliability of stream connectivity, and thus suitability for young-of-year. Both explanatory variables are important in promoting hydrologic connectivity throughout the summer rearing period and facilitating the migration of young-of-year to overwintering lakes prior to freeze up. Contributing upstream lake area and land classification data may be obtained remotely, which allows for preliminary predictions of stream suitability to be conducted with minimal financial and logistic effort, and more spatially focused field operations. The occupancy model developed here can be used as a valuable predictive tool for Arctic Grayling young-of-year stream use in the Barrenlands, and will facilitate regulators, scientists, resource managers, and industry in developing more effective conservation and mitigation plans for fish and fish habitat in areas of resource development.