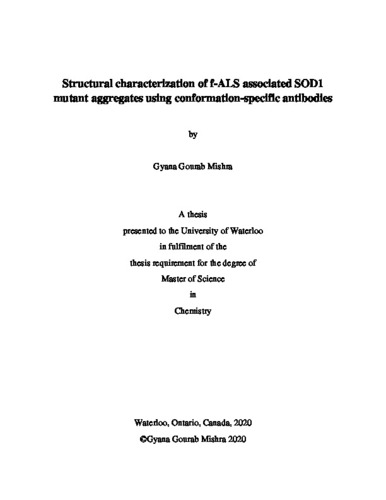 Superoxide dismutase 1 (SOD1) is a metalloenzyme ubiquitously expressed in all cells and acts as an antioxidant enzyme by catalyzing the dismutation of superoxide radicals. Several mutations in the gene encoding SOD1 are linked to the fatal neurodegenerative disease, Amyotrophic lateral sclerosis (ALS). Despite this connection, there is no clear relationship between any quantifiable properties of SOD1 and ALS disease characteristics. One of the key hallmarks of ALS is the formation of SOD1 aggregates in motor neurons. The unfolded SOD1 goes though several post-translational modification steps in vivo, that includes metal binding, disulfide bond formation, and dimerization, to reach its final maturation form which is a stable homodimer. While the mature SOD1 is highly stable, the immature state of SOD1 (E,E SOD1SH) is prone to misfold and aggregate, thereby potentially play a critical role in the disease pathology. Here, we have developed a quantitative dot blot technique to characterise the aggregate structures of several immature SOD1 mutants using four conformation-specific antibodies. These antibodies can only bind to misfolded conformations of SOD1 upon exposure of their binding epitope regions which stays typically buried in the native structure of the protein. The aggregates were prepared in the form of inclusion bodies using the E. coli expression system grown in minimal media. Our results show that different SOD1 mutants exhibit a variable extent of binding to the conformation-specific antibodies, suggesting that SOD1 is displaying mutation-dependent conformational prion-strain behaviour by aggregating into distinct conformations. Hence, the developed quantitative dot blot protocol has provided valuable information on the mechanism of SOD1 aggregation and could potentially be expanded to study aggregate structures of other forms of SOD1 as well as several other proteins that are linked to other neurodegenerative diseases.