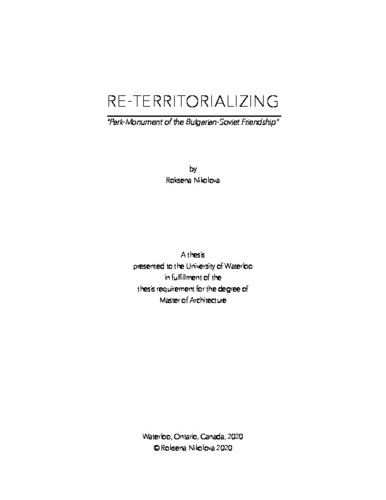 The silhouettes of colossal Soviet monuments in Bulgaria shaped the landscape of the nation, both physically, and metaphorically. Many remain abandoned, some have been removed, a few modified, but their controversy remains forever in history. One of them, now abandoned, landed on a hill and with obstinate assurance still stands — The Park-Monument of The Bulgarian-Soviet Friendship in Varna. A ghostly iron fist, hidden in its shadow, continues to haunt the nation. Its existence in Bulgaria, as with other monuments around the world, tied to past ideologies, is highly contested. The relevance of existing monuments and their relationship to an oppressive regime remains controversial. I confront the Friendship Monument by confronting my personal past. This subjective story, as it relates to this particular monument, also relates to a larger issue: A dominating power exist, both inside and outside the human body and psyche. I challenge power; the power of the dominator over the dominated. I investigate this power by engaging the monument, by collecting drawings and images, and by making artefacts. I make models, casts, collages, in a mode of serious play, I experiment with my relations to power through what the monument awakens in me. I open it up and expose what is hidden and locked away, so that I can bring into light the darkest moments of my past. The Friendship Monument must continue to jog the memory, to stimulate a reoccurring and rhythmic re-evaluation of the past to inform the future. The territory that comes with a socialist past is anchored in my present, through the legacy of the Soviet Union embodied in this monument, and it is not a territory that I want to continue to accept. The power over the people, the totalitarianism, the domination of an era manifested through this particular monument, is something I will confront repeatedly. Through this archive of drawings, photographs, and memories, I make an assemblage of parts that interact and inform each other in the hope of creating a new territory. I can also, in the future, come back to and replenish a memoir from a new territorial perspective.