Manipulation of Ga2O3 Nanocrystals for the Design of Functional Phosphors 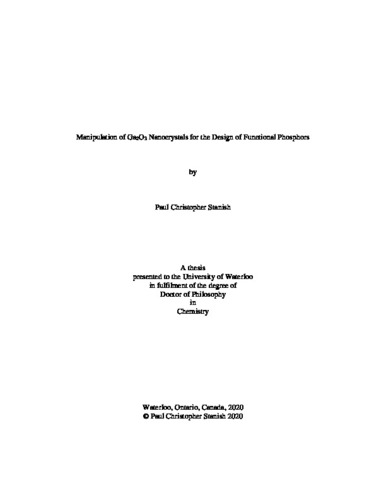 Transparent conducting oxides are of great interest in semiconductor research and industry. Their ability to carry electricity while remaining transparent allows them to be used for different applications including photovoltaics, lighting, and photocatalysis. Among transparent conducting oxides, Ga2O3 has the widest band gap and is characterized by a strong broad-band blue-green afterglow emission, making it attractive for various lighting applications. The main motivation of this thesis is to use these unique properties of Ga2O3 to design new phosphors with targeted optical properties. The research described in this thesis specifically focuses on generating white light by non-radiative energy transfer between Ga2O3 nanocrystals, as energy donors, and orange-red emitting semiconductor quantum dots, as energy acceptors, and using dopant-induced trap states to extend afterglow emission. Solution phase conjugation of colloidal nanocrystals allows for short-range energy transfer processes to occur with high probability, which is valuable for sensing and lighting. The first part of this thesis demonstrates the conjugation and electronic coupling of Ga2O3 nanocrystals with CdSe/CdS core/shell quantum dots. The introduction of a bifunctional organic ligand to the suspension mixture of these nanocrystals allows for their conjugation. The resulting Förster resonance energy transfer leads to quenching of Ga2O3 emission and an increase in the emission of CdSe/CdS quantum dots. As the ratio of CdSe/CdS quantum dots to Ga2O3 nanocrystals increases, so does the quenching of Ga2O3 emission and the CdSe/CdS photoluminescence intensity. The increase in quenching of Ga2O3 emission was successfully modelled assuming a Poisson distribution of CdSe/CdS quantum dots bound to Ga2O3 nanocrystals. Owing to the good emission colour complementarity of these materials, white light was observed for optimal nanoconjugate composition. Next, we demonstrated that the same phenomenon can be achieved without the organic linker by a careful deposition of the colloidal mixture on the glass substrate to remove the empty space between nanocrystals. This approach enables a surface-mediated Förster resonance energy transfer that allows for a design of all-inorganic white light emitting phosphors. The resulting films were highly luminescent and were tuned to give CIE coordinates of 0.31, 0.28. Gallium oxide also has a long luminescence lifetime, compared to other nanoparticles with similar emission strengths, enabled by its donor-acceptor pair recombination. This phenomenon makes Ga2O3 nanocrystals a prime candidate for attempting to design persistent afterglow nanophosphors through doping nanocrystals with selected trivalent rare earth metals. These rare earth elements provide a mechanism for trapping excited free carriers because relaxation within these dopant ions is Laporte forbidden. As a result of doping Ga2O3 with Dy3+, the emission of Ga2O3 nanocrystals becomes significantly longer at room temperature. More interestingly, the temperature-dependent emission of Ga2O3 nanocrystals doped with Dy3+ for doping levels between 3 and 13 % increased between 50 K and 200 K, where typical semiconducting nanocrystals show strong quenching. We attribute this anomalous behavior to the carriers trapped in Dy3+ excited states, that are thermally reactivated and subsequently relax to Ga2O3 native traps states. This assignment was validated by a kinetic Monte Carlo simulation, which was in good agreement with experimental results. As the importance of luminescence materials, particularly persistent phosphors, increases it is imperative that undergraduate students in chemistry and materials science become familiar with their properties and fabrication. A new laboratory exercise encompassing the combustion synthesis, processing, and characterization of SrAl2O4:(Eu2+, Dy3+) has been adopted by NE 320L course in the Nanotechnology Engineering program at the University of Waterloo. In this laboratory, students produced crude strontium aluminate containing Eu3+ which was subsequently annealed under hydrogen gas, resulting in the red europium emission. This emission becomes green upon reduction of Eu3+ to Eu2+. Students performed XRD showing a dramatic increase in crystallinity after annealing, while their SEM measurements did not show a significant change in morphology. Mechanoluminescence was observed using a ballistic setup and found to show a linear dependence on the projectile velocity. In this thesis I demonstrated the extrinsic (external functionalization) and intrinsic (doping) manipulation of the electronic structure of gallium oxide nanocrystals. The obtained results allow for technological application of the resulting materials (e.g., to generate white light and extend afterglow emission), and provide a framework to enrich upper-year undergraduate curriculum in materials science and nanotechnology.