Mediation: Resonating between the Organic and Inorganic 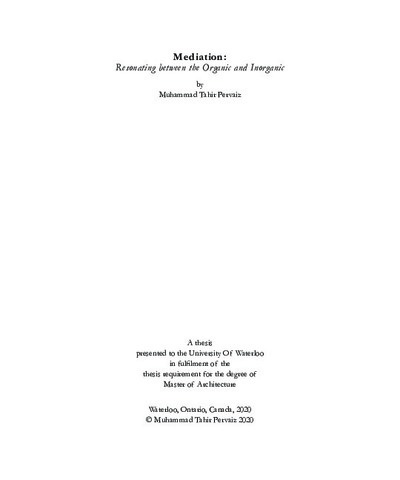 This thesis emerges from the desire of unity between the intuitive and empirical expressions of nature. It argues for a greater understanding of 'patterns' inherent in nature and advocates for the need to see things as a whole, rendering the world as a continuum of interconnected, interdependent fields. In doing so, the work seeks connections by deploying the element of 'play' and the search for 'process' by developing organic constructions and apply those relationships to inorganic crystalline geometries which are linked through spatial, chemical, and material, and topological relationships. The project carries with it a personal journey which resonates between intuitive play and rational modular understanding. The synthesis of the research consists of three parts: the first, situates itself in the contemplative, intuitive aesthetics of Jekabs Zvilna, created by 'domesticating' nature's forces into an ensemble of two-dimensional 'organic' patterns. The second explores crystalline geometries for relationships described in nature, and as a result produce generative modular constructions. The third part appropriates the form languages at the Living Architecture Systems Group that allow a distillation of the organic and inorganic into a singular whole. They offer an alchemical transmutation – a synthesis of polarities that serve as a testbed for evolving geometries; that apply to mediation, interpenetration and integration of the natural and the technological systems. While there are notable differences in the works presented, there is significant common ground in their representation of form generative processes in nature. As the work offers insight into the emerging relationships between nature and technology, it invites us to reconcile the disparate aspects of arts and sciences and the practice of architecture. For this synthesis, the research resonates between poetics and ethics while speculating on the 'mediation' between the shattered demarcations: the animate and inanimate; the being and becoming; the essence and substance; and the natural and the technological. It engages past situations wherein artists, architects, art and architecture, were integral and largely inseparable creating context from Bruno Taut, Moholy-Nagy, and Jakebs Zvilna. The theoretical basis is situated in both architectural and philosophical traditions, recognizing mediation as the order of balancing the contraries, proposing the integration of systems and a new unified understanding of the world; a living world perhaps.