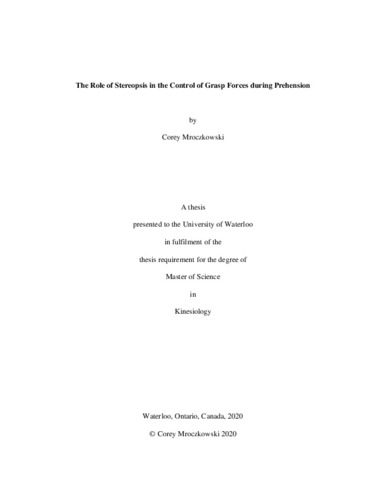 Background: Binocular viewing is associated with a superior prehensile performance, which is particularly evident in the latter part of the reach as the hand approaches and makes contact with the target object. However, the visuomotor mechanisms through which binocular vision serves prehensile performance remains unclear. The present study was designed to investigate the role of stereopsis in the planning and control of grasping using outcome measures which reflect predictive control. It was hypothesized that binocular viewing will be associated with more efficient grasp execution because stereoacuity provides more accurate sensory input about the object’s material properties to plan appropriate grip forces to successfully lift the target object. In the case when binocular vision is reduced or unavailable, predictive control of grasping will be reduced, and subjects will have to rely on somatosensory feedback to successfully execute the grasp. Methods: 20 healthy participants (17-35 years, 11 male) with normal vision were recruited. Subjects performed a precision reach-to-grasp task which required them to reach, grasp, and transport a bead (~2 cm in diameter) to a specified location. Subjects were instructed to perform the task as fast as possible in the following viewing conditions: binocular, monocular, and two conditions with reduced stereoacuity: 200 arcsec stereo, 800 arcsec stereo, which were randomized in blocks. Results: Binocular, compared to monocular viewing had a greater influence on the grasp phase compared to the reach and transport phase. Specifically, there was a 36% increase in post-contact time, 29% decrease in grip force 50ms following object grasp, and 30% increase in grasp errors. In contrast, parameters of the reach and transport phase only demonstrated a 3-8% reduction in performance. Grasp performance was similarly disrupted during binocular viewing with reduced stereoacuity whereby a reduction in stereoacuity was associated with a proportional reduction in grasp performance. Notably, grip force at the time of object lift-off was comparable between all viewing conditions. Conclusion: The results demonstrate that binocular viewing contributes significantly more to the performance of grasping relative to the reach and transport phase. In addition, the results suggest that stereopsis provides important sensory information which enables the central nervous system to engage in predictive control of grasp forces. When binocular disparity information is reduced or absent, subjects take on a more cautious approach to the grasp and make more errors (i.e., collisions followed by readjustments). Overall, findings from the current study indicate that stereopsis provides important sensory input for the predictive control of grasping, and a progressive reduction in stereopsis is associated with increased uncertainty which results in a greater reliance on somatosensory feedback control.

Corey Andrew Mroczkowski (2020). The Role of Stereopsis in the Control of Grasp Forces during Prehension. UWSpace. http://hdl.handle.net/10012/15944