On the Integration of Unmanned Aerial Vehicles into Public Airspace 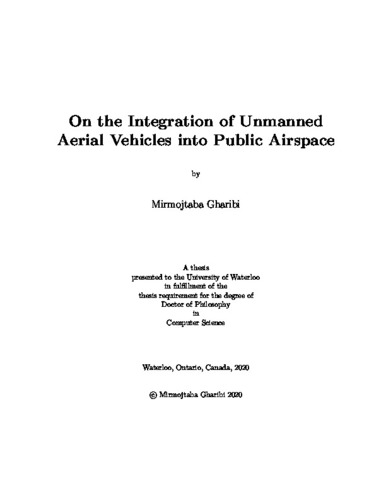 Unmanned Aerial Vehicles will soon be integrated in the airspace and start serving us in various capacities such as package delivery, surveillance, search and rescue missions, inspection of infrastructure, precision agriculture, and cinematography. In this thesis, motivated by the challenges this new era brings about, we design a layered architecture called Internet of Drones (IoD). In this architecture, we propose a structure for the traffic in the airspace as well as the interaction between the components of our system such as unmanned aerial vehicles and service providers. We envision the minimal features that need to be implemented in various layers of the architecture, both on the Unmanned Aerial Vehicle (UAV)'s side and on the service providers' side. We compare and contrast various approaches in three existing networks, namely the Internet, the cellular network, and the air traffic control network and discuss how they relate to IoD. As a tool to aid in enabling integration of drones in the airspace, we create a traffic flow model. This model will assign velocities to drones according to the traffic conditions in a stable way as well as help to study the formation of congestion in the airspace. We take the novel problem posed by the 3D nature of UAV flights as opposed to the 2D nature of road vehicles movements and create a fitting traffic flow model. In this model, instead of structuring our model in terms of roads and lanes as is customary for ground vehicles, we structure it in terms of channels, density and capacities. The congestion is formulated as the perceived density given the capacity and the velocity of vehicles will be set accordingly. This view removes the need for a lane changing model and its complexity which we believe should be abstracted away even for the ground vehicles as it is not fundamentally related to the longitudinal movements of vehicles. Our model uses a scalar capacity parameter and can exhibit both passing and blocking behaviors. Furthermore, our model can be solved analytically in the blocking regime and piece-wise analytically solved when in the passing regime. Finally, it is not possible to integrate UAVs into the airspace without some mechanism for coordination or in other words scheduling. We define a new scheduling problem in this regard that we call Vehicle Scheduling Problem (VSP). We prove NP-hardness for all the commonly used objective functions in the context of Job Shop Scheduling Problem (JSP). Then for the number of missed deadlines as our objective function, we give a Mixed Integer Programming (MIP) formulation of VSP. We design a heuristic algorithm and compare the quality of the schedules created for small instances with the exact solution to the MIP instance. For larger instances, these comparisons are made with a baseline algorithm.