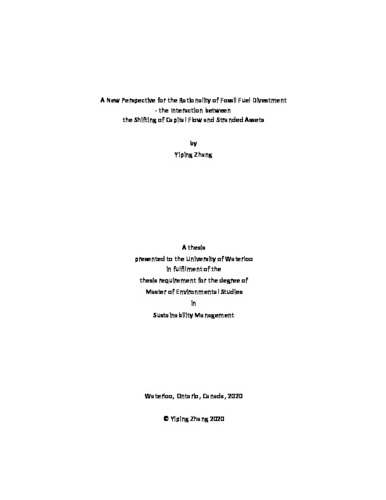 In recent years, fossil fuel divestment has shown increasing popularity among individual and institutional investors. Investors adopt this strategy due to two types of consideration, which are moral and financial concerns. Out of moral concerns, investors want to shift the capital flow to help limit the fossil fuel companies’ business development and capital expansion, and out of financial concerns, investors want to avoid the financial risks coming from the stranded asset. However, the effectiveness of fossil fuel divestment as one of the climate actions is debated and challenged. The previous studies mainly focused on assessing the financial performance and carbon intensity of divestment or divest-reinvest portfolios to answer the question of “whether divestment can fulfill both financial and moral obligations”, and these studies received mixed findings. This study supports the rationality of fossil fuel divestment and reinvestment movements by supporting the two concepts, shifting of capital flow and stranded assets, which respectively relate to the moral and financial concerns. The direction of “causation” between these two concepts is also explored. The study focuses on the fossil fuel industry and the green energy industry, and the research sample selects 70 green energy companies from Nasdaq Clean Edge Green Energy Index (CELS) and 90 fossil fuel companies from Carbon Underground 200. Firstly, by applying the production theory and the Cobb-Douglas production function, two models are built with various factors of production or various financing methods with Ordinary Least Squares regression (OLS) on panel data of the two industries from 2013 - 2018. Secondly, the Granger Causation test is employed to explore the interaction between the various input factors of production and the industrial output, which supports the two concepts, shifting of capital flow and stranded asset. The interactions between these two concepts and the two concerns are also discussed. In addition, lagged OLS is employed to tackle the potential endogeneity issue in the regression model. The findings of this study are in line with previous studies. The descriptive statistics show that the green energy industry can be a growing industry, while the fossil fuel industry can be a mature and probably, declining industry. The transition to a low-carbon economy may accelerate this process. The regression identifies the factors which have significant influences on the output of the fossil fuel industry and the green energy industry. The Granger Causation test discovers the “bi-directional causality” (or “bi-directional feedback”) between the “market demand & industrial output” and the “various factors of production (model one) and various financing methods (model two)”, proving the two concepts of shifting of capital flow and stranded assets. Besides, the study explains the bi-directional interaction between these two concepts and finds that the shifting of capital flow precedes (contributes to, helps to predict) the stranded assets. At the same time, the stranded assets also precede (contributes to, helps to predict) the shifting of capital flow. This study provides support to the rationality of carbon divestment from a new perspective. Compared to previous research, this study is not to explore the effectiveness of divestment from the perspective of market performance data, but to support the effectiveness by explaining the mechanism of this strategy. Besides the academic value, the models built in this study also have practical values. The two models, which are respectively built with various factors of production and various financing sources, are referable for the low-carbon economy transition and the development of responsible investment products.

Yiping Zhang (2020). A New Perspective for the Rationality of Fossil Fuel Divestment - the Interaction between the Shifting of Capital Flow and Stranded Assets. UWSpace. http://hdl.handle.net/10012/15942