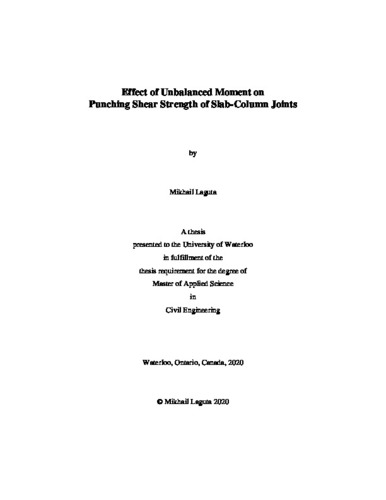 The design of reinforced concrete flat plate slab-column connections subjected to unbalanced moments varies greatly between national design codes. Specific to Canada and the United States (U.S.), assumptions relating to the distribution of unbalanced moments between shear and flexure stresses were introduced in the 1970s based on limited research. Research on the topic of slab-column connections subjected to eccentric loading has deviated away from the linear shear distribution assumptions of Canada, the U.S., and Europe in favour of beam, truss, membrane, and other analogies. As such, it is of value to study the performance of varying design code approaches as well as the accuracy of the stress distribution assumptions within Canadian and American design codes. In this thesis, numerical modelling of slab-column connections subjected to eccentric loading is performed by the author using the software Abaqus (Dassault Systèmes). Finite element models were created to simulate the behaviour of laboratory-tested slab-column specimens. Preliminary finite element model parameters were based on research by Genikomsou (2015) and geometry, material, and boundary condition assumptions specific to the specimens. Calibration of the finite element models was necessary to ensure that the analyses accurately reproduced behaviour observed during testing. This was done by changing one parameter at a time and selecting the parameter value that resulted in the most accurate results. Accuracy was evaluated based on the analyses’ ability to reproduce moment-rotation data, load-displacement data, and crack patterns of the experiments. To verify the calibrated parameters, finite element analyses of two edge connections of varying eccentricities and one interior connection subjected to concentric loading were conducted. The calibrated finite element models were used to perform a parametric study on the effects of varying eccentricities on the punching shear strength of three slab-column connections with reinforcement ratios of 0.5-percent, 1.0-percent, and 1.5-percent. The study showed that the normalized moment-shear data of the three specimens is nonlinear. In contrast, all design codes assume a linear moment-shear interaction. With regard to design code performance, none of the design codes’ punching shear provisions accurately predicted the capacities of the specimen with a reinforcement ratio of 0.5-percent. This is because this specimen’s flexural reinforcement yielded before punching shear failure could occur. Since ACI 318-19 and CSA A23.3-19 do not consider the contribution of flexural reinforcement to a connection’s punching shear strength, each of these design codes was accurate for only one reinforcement ratio. Eurocode 2 (2004) accurately predicted the punching shear strength of specimens subjected to concentric loads. Furthermore, it underestimated the punching shear strength for eccentricities approaching infinity (i.e. only unbalanced moments). This was likely because the specimens failed in flexure, rather than punching, when subjected to large unbalanced moments. The level I, II, and IV approximations of fib Model Code 2010 underestimated the punching shear capacities for all eccentricities. Of the three levels of approximation, the level IV predictions best reproduced the shape of the moment-shear interaction obtained from finite element analyses. The distribution of unbalanced moments between shear and flexural stresses at a critical section d/2 from the column face (as defined by ACI 318-19 and CSA A23.3-19) was found to vary depending on the magnitude of vertical loads applied and the reinforcement ratio. Both ACI 318-19 and CSA A23.3-19 describe this distribution using a coefficient 𝛾𝑣. This coefficient is assumed to be equal to 0.40 for square, interior connections. From the results of specimen analyses, the coefficient 𝛾𝑣 was approximately equal to 0.25 for specimens subjected to low eccentricities and approximately 0.40 for specimens subjected to large eccentricities. An equation was presented to predict the coefficient 𝛾𝑣 specific to the specimens analysed. Further development of the equation is required to allow it to be applicable to other specimens.