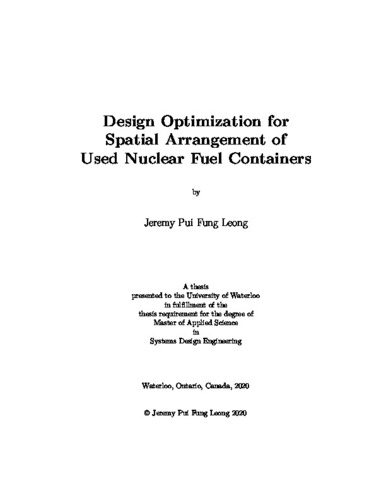 Canada's proposed deep geological repository is a multiple-barrier system designed to isolate used nuclear fuel containers (UFCs) indefinitely with no release of radionuclides for at least one million years. Placing UFCs together as densely as possible is ideal for mitigating repository size and cost. However, due to heat generation from radioactive decay and material limitations, a key design criterion is that the maximum temperature inside the repository must not exceed 100 °C. To satisfy that criterion, design optimization for the spatial arrangement of UFCs in a crystalline rock repository is performed. Spatial arrangement pertains to: (i) the spacing between UFCs, (ii) the separation between placement rooms underground, and (iii) the locations of variously aged UFCs that generate heat at different rates. Most studies have considered UFCs to be identical in age during placement into the repository. Parameter analyses have also been performed to evaluate repository performance under probable geological conditions. In this work, the various ages of UFCs and the uncertainties in spacing-related design variables are of focus. Techniques for the actual placement of UFCs in the deep geological repository based on their age and methods for repository risk analysis using yield optimization are developed. The thermal evolution inside the deep geological repository is simulated using a finite element model. With many components inside the massive repository planned for upwards of 95,000 UFCs, direct optimization of the model is impractical or even infeasible due to it being computationally expensive to evaluate. Surrogate optimization is used to overcome that burden by reducing the number of detailed evaluations required to reach the optimal designs. Two placement cases are studied: (i) UFCs all having been discharged from a Canadian Deuterium Uranium reactor for 30 years, which is a worst-case scenario, and (ii) UFCs having been discharged between 30 and 60 years. Design options that have UFC spacing 1–2 m and placement room separation 10–40 m are explored. The placement locations of the variously aged UFCs are specified using either sinusoidal (cosine) functions or Kumaraswamy probability density functions. Yield optimization under assumed design variable tolerances and distributions is performed to minimize the probability of a system failure, which occurs when the maximum temperature constraint of 100 °C is exceeded. This method allows variabilities from the manufacturing and construction of the repository components that affect the design variables to be taken into account, incorporating a stochastic aspect into the design optimization that surrogate optimization would not include. Several distributions for the design variables are surveyed, and these include uniform, normal, and skewed distributions—all of which are approximated by Kumaraswamy distributions.