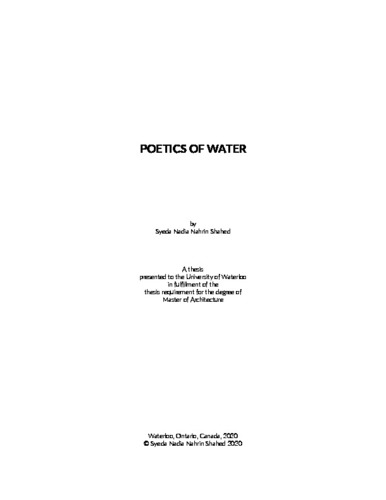 Dhaka was built on the banks of the river Buriganga around 700 AD. Over the last 400 years, it has grown into one of the most densely populated cities in the world. Every year, Dhaka sees an influx of migrants, who move to the city in search of jobs and a better life. With this rapid growth in the population of the city, the urban fabric is also growing rapidly. Waterbodies are rapidly being filled up, canals are being fragmented, and economic disparities are becoming wider. The city started because of the presence of water; water allowed its growth, and water created an agriculturally rich ground for farming and the livelihoods of the people of the country. Dhaka has been isolated from water by planners and developers. Every monsoon season, Dhaka suffers from severe flooding. Since the devastating flood of 1988, the western part of Dhaka has been surrounded by an embankment system. This embankment now causes waterlogging: the pumps and sluices built along the embankment cannot extract enough trapped water during the rainy season. This thesis is an exploration of the relationship between the city and water. It attempts to reconnect land, water and people through urban, landscape, and architectural design. It proposes strategies for flood mitigation and water management in the city. Then, it proposes a design at a microscale that can act as a prototype for urban resilience and sustainable design. The aim of the design proposal at the end of this thesis is to suggest a means to connect the city and the people back to water.