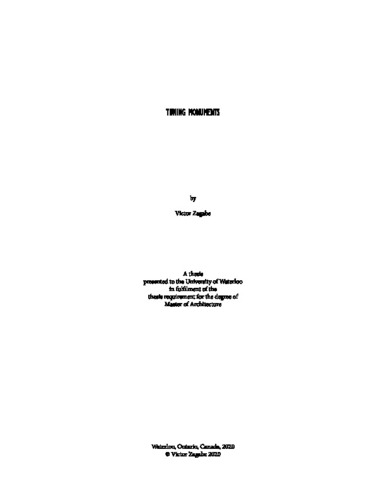 This thesis examines the development of historically inaccurate monuments that censor and sanitize reality by questioning their ongoing legacies by using a derivative of counter monument culture. Tuning Monuments seeks to understand how architects might design monuments that stimulate civic life and become transcontinental bridges across communities. By looking at the postcolonial discourse between the Democratic Republic of Congo and Belgium, where the debate of the repatriation of artefacts has been reopened recently by the Reorganization campaign of the Royal Museum of Central Africa, this thesis advocates for the monumentalization of the process of repatriation. This monument, dubbed the repatriative monument, asks how the debate of ownership transgresses over time in physical space. By encasing a method of revising, criticizing, and reframing monumental space in relation to their foundational ideologies, the work hopes to see how the nation building ideologies of imperialism and its opposite in Zairianization can be used as contrasting lenses through which we can understand monumental architecture. The work will birth a design proposal, whose siting will be explained within the context of social, material and perceptual spheres. Ultimately, Tuning Monuments tries to understand the implications of building such a monument. It serves as a commentary of physically manifesting opposing ideologies within a singular site. Most importantly, it attunes the audience to invisible processes by allowing them to tune into their surroundings.