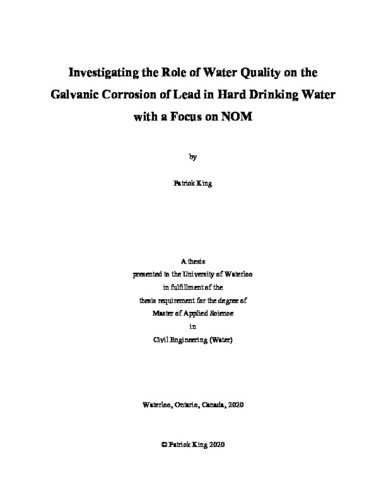 Although the use of lead in water distribution systems is currently prohibited in Canada, old lead service lines, lead solder, and lead containing plumbing fixtures continue to be sources of lead in the tap water of many households. Due to the potential health impacts associated with the exposure to lead, it is a regulated contaminant. As the regulations regarding lead in drinking water are becoming more stringent, many municipalities not currently implementing corrosion control measures may be required to do so in the near future. Water quality plays an important role with regards to the corrosion and subsequent release of lead into drinking water. The impacts of many water quality parameters on the release of lead have been well studied, however the impact of some parameters such as hardness and natural organic matter (NOM), require further examination. In particular, the majority of lead corrosion research has focused on soft waters and not on hard waters, which have much higher concentrations of dissolved inorganic carbon (DIC) and hardness. To address literature gaps this study had two major goals; the first goal was to determine if hard waters could be aggressive to lead and the second goal was to evaluate if NOM could be a water quality factor of concern for lead release in real drinking water in Southern Ontario. To achieve these objectives the study was conducted in two phases. The first phase (Phase I) involved assessing the impact of pH, DIC, hardness, and NOM on the galvanic corrosion of lead using synthetic waters. The test pieces consisted of lead and copper pipes with an external galvanic connection. This experiment involved 20 weeks of “dump and fill” events where the test pieces were manually emptied and then refilled with water of the same chemistry. The pH had a potentially significant impact on the release of total lead from the test pieces, with an increase in the pH from 7 to 8.5 resulting in a decrease in the release of total lead by an average of 4,390 µg/L. DIC did not have a significant impact on the release of lead, but did potentially significantly increase the galvanic current. To be precise, an increase in the DIC concentration from 10 mg/L to 80 mg/L increased the galvanic current by an average of 28.4 µA. NOM dosed at a relatively high concentration of 7 mg DOC/L of Suwannee River NOM (SR NOM) had a potentially significant impact on the release of dissolved lead from the test pieces, increasing it by an average of 2,320 µg/L. Using fluorescence excitation emission matrix (FEEM), it was identified that there was a correlation between the release of dissolved lead and a decrease in the humic and fulvic acid intensities during stagnation. This provided indirect evidence that the formation of lead-NOM complexes were at least partially responsible for the increase in dissolved lead. Interestingly, hardness did not have a significant effect on the galvanic current or lead release, and oversaturating the waters with calcium carbonate did not mitigate lead release. As SR NOM at a relatively high concentration of 7 mg DOC/L was found to greatly increase the release of dissolved lead in a variety of synthetic waters in Phase I, the second phase of this study (Phase II) focused on assessing if NOM could be a water quality factor of interest in real drinking water in Southern Ontario. This involved comparing lead release from test pieces exposed to raw groundwater from a municipal well in Cambridge, Ontario, treated but unchlorinated water from the Mannheim Water Treatment Plant which receives water from the Grand River in Southern Ontario, and four synthetic waters that modelled the real waters. Two of the synthetic waters modelled each of the real waters; one with SR NOM at a similar DOC concentration as in the real waters and another without any NOM. Phase II utilized test pieces of the same design as in Phase I and involved 21 weeks of “dump and fill” experiments. As expected, the dissolved lead release varied significantly between the different water types. Interestingly, the real waters released less dissolved lead than the synthetic waters with SR NOM but more dissolved lead than the synthetic waters without NOM. Using field flow fractionation with inductively coupled plasma mass spectrometry and ultraviolet absorption at 254 nm, it was determined that both the complexation of lead with NOM and colloidal dispersion caused by NOM could be attributed to elevated dissolved lead release in the presence of SR NOM and to a lesser extent the NOM in the real waters. Based on testing of the NOM using FEEM and liquid chromatography with organic carbon detection, it appeared that humic and to a lesser extent fulvic acids formed soluble complexes with oxidized lead. The results suggest that hard waters could be aggressive towards lead, as lead release was relatively high in many of the hard waters. Additionally, hardness was not found to have a significant impact on lead release in Phase I and hardness films were not detected on any of the lead pipes in Phase I or II. Furthermore, DIC was found to increase the galvanic current between the lead and copper pipes, indicating that hard waters may be particularly susceptible to galvanic corrosion. As well, NOM may be a water quality factor of interest in a variety of real waters in Southern Ontario, including hard waters. Optimization of the treatment or removal of NOM is recommended for utilities that are attempting to decrease lead concentrations in consumers’ taps.

Patrick King (2020). Investigating the Role of Water Quality on the Galvanic Corrosion of Lead in Hard Drinking Water with a Focus on NOM. UWSpace. http://hdl.handle.net/10012/15913