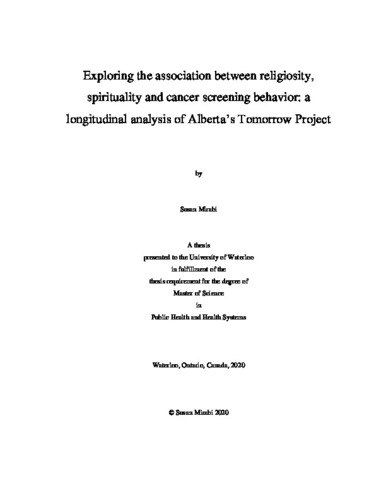 Background: This thesis examined the effect of religiosity/spirituality (R/S) on breast, prostate, and colorectal cancer screening behaviour. Over two-thirds of Canadians identify with some form of religion or spirituality. R/S can affect the intentions, beliefs and behaviours of individuals. Many religious and spiritual practices place an emphasis on the preservation of health. Breast, prostate and colorectal cancers account for a large proportion of cancers in Canada. Screening is an effective form of secondary prevention for cancer. R/S may provide a platform of positive influence to encourage greater cancer screening. Objective: Data from Alberta’s Tomorrow Project (ATP) were used to explore the longitudinal association between R/S and breast, prostate and colorectal cancer screening behaviour. Methods: ATP participants between 35 and 70 years, without a history of chronic disease at baseline, were included in the analysis. For longitudinal analysis, participants had a minimum of one post-baseline screening datapoint. R/S was measured through two variables: Salience and Attendance. R/S Salience assessed the importance of religion or spirituality to ATP participants, asking them: “Do spirituality values or faith play an important role in your life?” Response options for R/S Salience were “Yes” or “No.” R/S Attendance assessed whether participants attended religious or spiritual services, with response options being limited to “Attends” or “Does Not Attend.” Multivariable logistic regression models were built for each R/S and cancer screening variable separately. All models were adjusted for age, social support, income, occupation, education, sex, marital status, perceived health, and smoking status. Results: Due to the large proportion of women undergoing mammography (69% at baseline and 95% at the final follow-up period), breast cancer screening was assessed cross-sectionally. Neither R/S Salience nor R/S Attendance were found to be statistically significantly associated with breast cancer screening (odds ratio [OR]=1.10, 95% confidence interval [CI]: 0.93-1.27, and OR:1.02, 95% CI: 0.86-1.21, respectively). Longitudinal analysis revealed that R/S Salience and R/S Attendance were also not statistically significantly associated with prostate cancer screening (OR:0.90, 95% CI: 0.68-1.19, and OR:1.18, 95% CI: 0.88-1.59, respectively). Only models for R/S and colorectal cancer screening produced statistically significant results. ATP participants who responded “Yes” to R/S Salience (compared to ‘No’), and participants who attended (versus not attended) religious or spiritual services (R/S Attendance), had 1.4 times (95% CI: 1.15-1.73) or 1.5 times (95% CI: 1.12-1.89) greater odds of obtaining a sigmoidoscopy or colonoscopy, respectively. Discussion: This thesis provided a Canadian context for the association between R/S and cancer screening, and added to the literature by incorporating both cross-sectional and longitudinal analyses; the preservation of temporality allowed us to examine whether the effects of R/S persisted over time. The current analyses were conducted using persons drawn from a large, population-based study encompassing a sample of adults aged between 35 and 70 years (n=5,014-11,977). This thesis suggested that R/S may have a positive influence on the cancer screening behaviours of Canadians. Future research should explore whether public health officials can leverage the effects of R/S to help increase the incidence of screening for cancers in populations where screening behaviour remains low.