Strangers in the Sky: A Designer’s Guide to Tackling Urban Loneliness 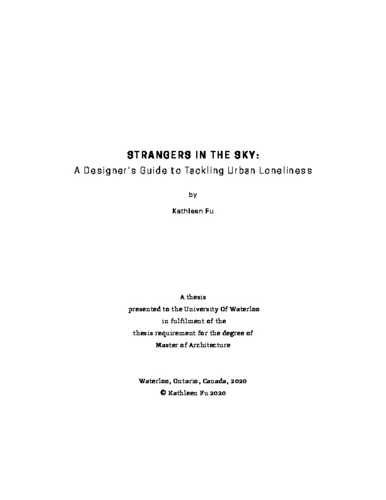 Research in cognitive science has revealed that being social is a fundamental component of being happy and studies have shown that mental health is greatly affected by the spatial and social construct of the built environment. The contemporary urban dweller in today’s society often experiences social isolation and loneliness despite living in close proximity to thousands of other people. For those living in high-rises specifically, issues surrounding chronic loneliness are now recognized as a concern to public health. People living in high-rises are reported to be more socially isolated, know very few of their neighbours and are generally less embedded in their community. The way we have constructed the built environment has created increasingly anti-social and hostile spaces, which lends itself to a more negative perception of society as a whole. This thesis will investigate the spatial conditions that contribute to the relatively new phenomenon of urban loneliness, with a focus on student accommodation buildings. The primary objective of this research is to graphically translate architectural findings based on case studies, readings, and other sources and distill them into a set of design principles for socialization in high-rise buildings for future use. Guidelines not only create a precedent for future architectural projects but are incredibly important to the practice itself. This research will identify opportunities to facilitate human connection within urban communities and imagines methods of minimizing the effects of loneliness in high rises of the future.