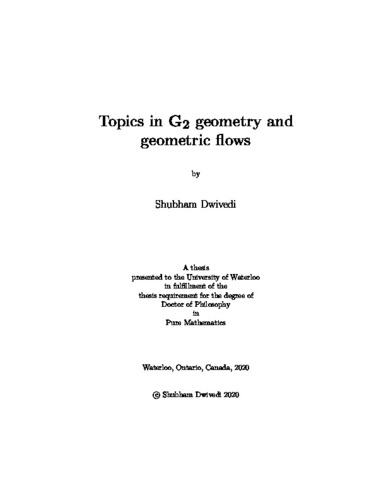 We study three different problems in this thesis, all related to G₂ structures and geometric flows. In the first problem we study hypersurfaces in a nearly G₂ manifold. We define various quantities associated to such a hypersurface using the G₂ structure of the ambient manifold and establish several relations between them. In particular, we give a necessary and sufficient condition for a hypersurface with an almost complex structure induced from the G₂ structure of the ambient manifold to be nearly Kähler. Then using the nearly G₂ structure on the round sphere S⁷, we prove that for a compact minimal hypersurface M⁶ of constant scalar curvature in S⁷ with the shape operator A satisfying |A|² > 6, there exists an eigenvalue λ > 12 of the Laplace operator on M such that |A|² = λ − 6, thus giving the next discrete value of |A|² greater than 0 and 6 in terms of the spectrum of the Laplace operator on M. The latter is related to a question of Chern on the values of the scalar curvature of compact minimal hypersurfaces in Sⁿ of constant scalar curvature. The second problem is related to the study of solitons and almost solitons of the Ricci- Bourguignon flow. We prove some characterization results for compact Ricci-Bourguignon solitons. Taking motivation from Ricci almost solitons, we then introduce the notion of Ricci-Bourguignon almost solitons and prove some results about them which generalize previous results for Ricci almost solitons. We also derive integral formulas for compact gradient Ricci-Bourguignon solitons and compact gradient Ricci-Bourguignon almost solitons. Finally, using the integral formula we show that a compact gradient Ricci-Bourguignon almost soliton is isometric to an Euclidean sphere if it has constant scalar curvature or if its associated vector field is conformal. In the third problem we study a flow of G₂ structures that all induce the same Riemannian metric. This isometric flow is the negative gradient flow of an energy functional. We prove Shi-type estimates for the torsion tensor T along the flow. We show that at a finite-time singularity the torsion must blow up, so the flow will exist as long as the torsion remains bounded. We prove a Cheeger–Gromov type compactness theorem for the flow. One possible motivation for studying this isometric flow of G₂-structures is that it can be coupled with “Ricci flow” of G₂ structures, which is a flow of G₂ structures that induces precisely the Ricci flow on metrics, in contrast to the Laplacian flow which induces Ricci flow plus lower order terms involving the torsion. In effect, one may hope to first flow the 3-form in a way that improves the metric, and then flow the 3-form in a way that preserves the metric but still decreases the torsion. More generally, the isometric flow is a particular geometric flow of G₂-structures distinct from the Laplacian flow, and both fit into a broader class of geometric flows of G₂-structures with good analytic properties. In the final section, we summarize the rest of the results on the isometric flow which include an Uhlenbeck type trick and the definition of a scale-invariant quantity ϴ for any solution of the flow and the proof that it is almost monotonic along the flow. We also introduce an entropy functional and prove that low entropy initial data lead to solutions of the flow that exist for all time and converge smoothly to a G₂ structure with divergence-free torsion. We study the singular set of the flow. Finally, we prove that if the singularity is of Type-I then a sequence of blow-ups of a solution admits a subsequence that converges to a shrinking soliton for the flow.