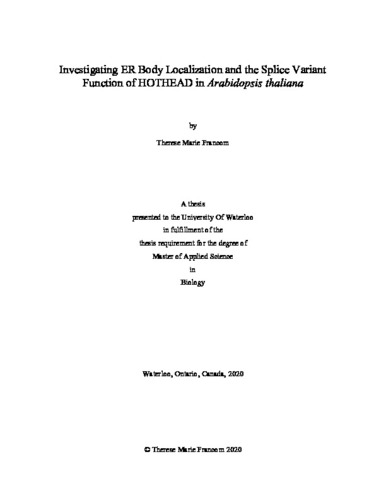 Plants live in constantly changing, often unpredictable environments and have evolved diverse strategies to adapt to these changes. The first line of defense for land plants is the cuticle – a layer which covers the epidermis of above ground organs and serves to protect them from desiccation, irradiation, and pathogens. In addition to playing a key role in defense, the cuticle mediates organ separation and expansion. Many genes involved in regulating cuticle formation and function have been identified through forward genetic screens and one such gene is HOTHEAD (HTH). Plants harboring mutant hth alleles show ectopic organ fusion, a phenotype resulting from changes in cuticle permeability. Transgenic plants expressing HTH translationally fused to fluorescent reporter gene constructs fully restore hth mutants to wild-type and show that the HTH protein is associated with the endoplasmic reticulum (ER). This study confirmed HTH localization to a specific set of stress inducible ER-derived organelles known as “ER bodies”. To further investigate the role of HTH in stress response pathways through its localization to ER bodies, HTH transcript and protein expression patterns were examined under stress conditions and were found to respond to both salt shock and methyl jasmonate exposure. In addition, HTH localization to ER bodies was confirmed through subcellular fractionation immunoblot analysis and the examination of the HTH localization pattern within the cells of an ER body mutant plant. The aforementioned studies focused on the full-length HTH protein, however, there are two known isoforms of HTH. The splice variant isoform (SV) is characterized by a 27 amino acid deletion in the fifth exon of HTH which occurs in the middle of a predicted GMC oxidoreductase substrate binding domain. The two isoforms may possess differing functions and expression patterns within the plant. Transgenic plants expressing the SV translationally fused to fluorescent reporter gene constructs did not restore hth mutants to wild-type, thus the confidence level at which conclusions on the function and expression pattern of the SV protein are not high. Expression studies with the SV protein translationally fused to fluorescent reporter gene constructs show that the SV isoform may be associated with the endoplasmic reticulum (ER) as well as ER bodies. Determining the roles that these two isoforms play in cuticle formation/function or stress response could provide insight into pathways by which the stress response or the cuticles of crop plants may be altered to withstand harsher or non-native environmental conditions. If these pathways can be elucidated, mechanisms for global food security could be expanded.