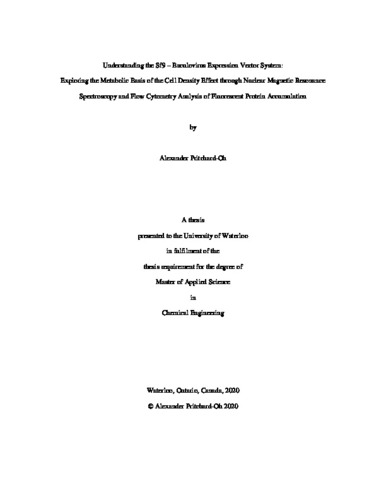 It is well established that the baculovirus expression vector system (BEVS) can serve as an important, effective production system for various biologicals. Knowing that the cells can serve as a production platform is useful, but there are still gaps in the knowledge of how best to manipulate this platform. There is room for improvement in both the upstream (in the design of the viral vector) and the downstream (in the optimization of the operating conditions of the growth culture) portions of the process. This thesis aimed to look at the latter group. In particular, this thesis was aimed to assess some gaps in the knowledge of the metabolic requirements of the cells as they grow and are infected. It was found that higher growth was easily achievable, but growth rate drops beyond a certain cell density regardless of frequency of media exchange. Cell density could be extended to 44 x 106 cells/mL, up from the 12 x 106 cells/mL achieved in batch culture, but that cell growth rate would drop beyond 15 x 106 cells/mL, regardless of the frequency of media replacement. Exploring this idea, it was determined that oxygenation did not appear to be the limiting condition here, as growth rate did not drop in a separate experiment wherein the cells were intentionally deprived of oxygen, down to less than a third of the concentration in the control culture. By using Proton Nuclear Magnetic Resonance (1H-NMR) spectroscopy to measure metabolite levels, eight compounds not studied in the literature were identified to drastically vary over the culture. Fructose, fumarate, hypoxanthine, and succinate all accumulated in the culture while choline, inosine, uracil, and uridine were depleted. While these compounds also did not seem to perfectly correlate with the drop in growth rate, it was hypothesized that they may be important for supporting growth and productivity. Fluorescent proteins were used to give a simple analogue for the productivity of the cells. However, a methodology for quantifying the productivity was needed. As an initial test, 1H-NMR revealed that the composition of the baculovirus stocks were very similar to normal spent media, and with the volumes of baculovirus stock required for addition to the culture will have minimal impact on bulk culture composition (although this does not rule out the influence of minor compounds undetectable via 1H-NMR). However, only the GFP virus was deemed to be useable based on the characteristics of its fluorescence. It was found that as a standard infection progressed, two distinct populations appeared. Testing found that these populations corresponded to healthy and compromised cells, respectively. The average fluorescence of only the healthy population increased with time whereas the average fluorescence of the compromised population was centered on a comparatively low value. Averaged together, this was a net 20% decrease in average fluorescence between 48 and 72 hpi. Individually, however, the healthy cells had roughly 60% higher fluorescence at 72 hpi than at 48 hpi. Therefore, a proposed “improved” gating method was chosen, where only the healthy population was looked at as a reporter for the progression of the infection. Overall, it was deemed that this would provide more useful information about the quality of the infection. Lastly, the goal was to improve the productivity of cell cultures under practical conditions. To this end, baselines for the production of a fluorescent protein were established, and then the methodology developed was used to assess the effect that the compounds of interest identified would have on the productivity of cells infected under suboptimal conditions. It was found that, as expected, the average fluorescence of a culture decreased when moving from low cell-density infection to high cell-density infection conditions (a 50% decrease). Interestingly, at low cell-density, media replacement was detrimental to fluorescent protein production (a 20% decrease) while at high cell-density, media replacement was beneficial (a 33% increase). An experiment was set up according to Placket-Burman design in order to effectively probe the effect of the 8 compounds of interest, and it revealed succinate to have an overwhelmingly negative impact on fluorescent protein production. However, it was suggested that the majority of this effect seemed to have come from pH change rather than inherently from succinate itself.