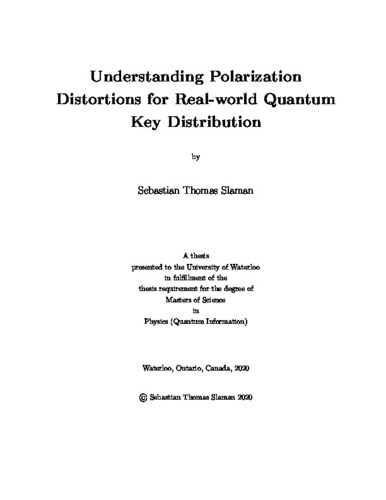 The field of quantum key distribution (QKD) has seen many advancements since its conception in 1984. Recently there have been developments towards establishing free space optical links between satellites and earth to enable global QKD networks. Polarization encoded photos are commonly utilized as qubits for these free space links, placing polarization distortion constrains on the optics used. Two polarization distortion studies were conducted in this thesis. The first is a simulation of stress induced birefringence in the Window Observational Research Facility window on board the International Space Station (ISS). Atmospherics pressure inside the ISS elicits stress on window leading to optical birefringence, which in turn can distort the polarization of photons as they pass through the window. The model studies the birefringent effects for incoming optical beams over different polarizations, diameters and incoming angles. As part of free space optical quantum links, it can be beneficial to utilize beam steering optics to manage the spatial positioning of various components in the system. Implementing beam steering optics can aid in achieving spatial and maneuverability requirements for ground stations and satellites as they track each other. However, these optics can have an adverse effect on incoming photon polarization states. Because of this, the effects of various different beam steering configurations were characterized experimentally, and compared to a corresponding simulated model. The studies presented in this thesis have revealed that common optics such as windows and mirrors can distort polarization based quantum signals. The polarization distortion of the studied optics have shown high dependencies on the angular orientation of the incoming optical beam. However, the distortions measured can be noticeably reduced by implementing compensation optics. As a result, their distortions are not detrimental to a quantum link that utilizes them. The studies presented in this thesis are critical to the design of polarization based quantum receivers as they shed light on potential sources of link distortions. This work is part of a large collection of developments bringing the implementation of global quantum key distribution networks closer to reality.