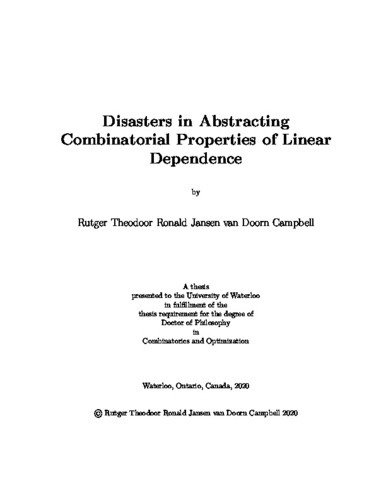 A notion of geometric structure can be given to a set of points without using a coordinate system by instead describing geometric relations between finite combinations of elements. The fundamental problem is to then characterize when the points of such a “geometry” have a consistent coordinatization. Matroids are a first step in such a characterization as they require that geometric relations satisfy inherent abstract properties. Concretely, let E be a finite set and I be a collection of subsets of E. The problem is to characterize pairs (E,I) for which there exists a “representation” of E as vectors in a vector space over a field F where I corresponds to the linear independent subsets of E. Necessary conditions for such a representation to exist include: the empty set is independent, subsets of independent sets are also independent, and for each subset X, the maximal independent subsets of X have the same size. When these properties hold, we say that (E,I) describes a matroid. As a result of these properties, matroids provide many useful concepts and are an appropriate context in which to consider characterizations. Mayhew, Newman, and Whittle showed that there exist pathological obstructions to natural axiomatic and forbidden-substructure characterizations of real-representable matroids. Furthermore, an extension of a result of Seymour illustrates that there is high computational complexity in verifying that a representation exists. This thesis shows that such pathologies still persist even if it is known that there exists a coordinatization with complex numbers and a sense of orientation, both of which are necessary to have a coordinatization over the reals.