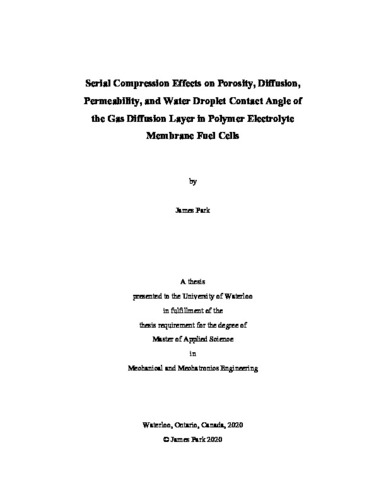 The polymer electrolyte membrane (PEM) fuel cell is an electrochemical device that directly converts the chemical energy of hydrogen and oxygen into electricity with water and heat as byproducts. It is very promising to wean or supplant our dependence on fossil fuels for energy. However, improvements to the cost, performance, and durability are remaining challenges before this green technology can be fully adopted. Increasing the current density in an operating fuel cell will degrade the cell potential, and both are required for high performance. The losses occurring at this level of performance is referred to concentration overpotential and is a result of inefficiencies in the reactant, primarily oxygen, transport through the gas diffusion layer (GDL) to the electrochemical sites, which may also be blocked by excess water. The GDL is typically made of a random arrangement of carbon fibers with total thickness under 400 μm. No two samples are truly identical. A better understanding of the parameters that can predict the gas transport and the water removal will help to further optimize the PEM fuel cell to achieve its performance goals for commercialization. Within an operating fuel cell, there is an inhomogeneous distribution of the stresses. The stresses alter the structure of the GDL and, in turn, affect the reactant transport and water droplet behaviour. By investigating the changes of the same sample over multiple compressions, three aspects are studied in the present thesis research: (i) gradual changes in the pore structure while maintaining other sample properties constant, (ii) the effect of these pore structure changes on gas transport phenomena in the GDL, and (iii) the effect of these changes on water droplet behaviour on the surface of the GDL. Many factors are involved in these two phenomena, but, in the case of the gas transport, are typically characterized by the normalized pore volume, or porosity, of the sample. This generalization of the other parameters into porosity limits the circumstances in which the model can be applied. Additionally, by using the same sample across multiple different tests, comparisons can be directly observed between them. Currently, there is a lack of experimental data that connects all of these phenomena. In the present thesis research, the GDL pore structure is manipulated by undergoing compression in a hydraulic press. Upon unloading of the stress, a permanent change in thickness is observed. The normalized change in thickness, inspired from the material sciences, is referred to as “residual strain”. Applying the concept of serial testing, each sample, once compressed, undergoes a battery of tests to extract information about the phenomena. Once completed, the same sample is compressed further and the process repeats. The GDL pore structure is experimentally characterized by the method of standard porosimetry (MSP), which operates on the principle of capillary equilibrium. MSP reveals the porosity, pore size distribution (PSD), pore surface area, and the mean pore radius. The permeability constant is measured using Darcy’s law via a modified Loschmidt Cell, while the effective diffusion coefficient is measured using Fick’s second law of diffusion via a Loschmidt Cell. Additionally, the water droplet behaviour is characterized via the Cassie-Baxter model on a goniometer. Assumptions are validated throughout the experiments. With the detailed pore structure available, new correlations and patterns are observed which show strong linearity between multiple samples. This is in contrast to the non-linear empirical models. The experimental studies presented in the present thesis is of great significance to (i) understand how the pore structure changes in response to compression, (ii) understand how these pore structure changes relate to reactant gas transport phenomena, such as the effective diffusion coefficient and permeability, and (iii) understand how the surface properties may not be similar to the bulk properties and how those differences and similarities can be used to predict water droplet behaviour, and, thus, be used to better predict performance in PEM fuel cells.