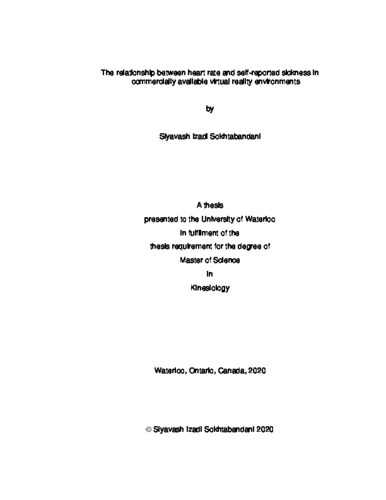 Virtual reality (VR), while beneficial in research, training, and entertainment has the tendency of causing cybersickness (CS). The symptoms range from mild to severe depending on the individual. There exists a gap in the academic literature regarding the combination of physiological and subjective measures of CS. It is currently unknown whether there is a relationship between these different measures and whether they can be used to predict CS before symptom development. A total of 18 young healthy adults were collected. Participants explored a CS inducing VR game ADR1FT (AD) for up to a maximum of 30 minutes twice. In one condition they were asked to rate their sickness levels based on the Fast Motion Sickness (FMS) scale every 2 minutes, and the next condition they were only asked to rate their sickness only at the beginning and end, while their heart rate (HR) was recorded. It was seen that both FMS and HR increased with prolonged exposure to VR. A paired t-test did not find the final FMS scores following the two conditions to be statistically different, suggesting that continuously asking for perceived ratings of sickness did not bias the participants to report a higher final FMS score. Additionally, heterogenous individual responses in FMS and HR revealed those that could be considered as “responders” and “non-responders,” suggesting that response to CS could be bimodal: slow and fast responders. We suggest that these results can be explained by sensory conflict theory, where in discrepancy between visual and vestibular inputs for self-motion, effect both subjective and physiological response.