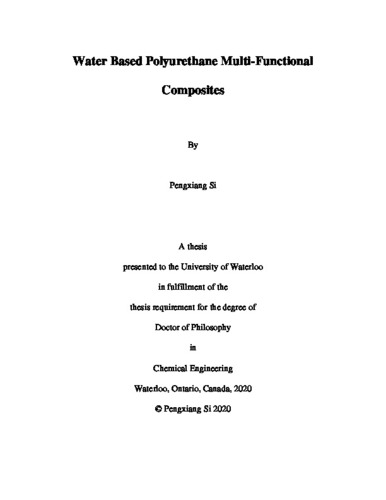 Polyurethanes (PUs) are a class of versatile polymers that exhibit various mechanical, physical, chemical and biological properties depending on their structure and morphology. Polyurethanes (PUs) have been employed in a variety of industrial applications including foams, coatings, textiles, machinery, sporting, transportation, vehicles and construction. However, the potentials of PUs in the emerging technology fields such as soft and wearable electronics, energy storage devices, biosensors, actuators, photovoltaic devices and stimuli-responsive materials are largely unexplored. The major objective of the thesis research is to develop PU composites for such emerging applications as e-textiles, self-healing electronics, and smart windows. In this project, we select water-based polyurethane (WPU) as the main polymer matrix to develop a variety of ink systems for multiple applications. Firstly, to investigate the application of WPU in flexible and stretchable electronics, we develop a WPU-silver and WPU-polypyrrole (PPy) conductive ink for textile. The effective penetration of obtained ink makes the textile conductive and mechanically robust. The electrical conductivity of the PU-silver textile is high but drops significantly under stretching due to the intrinsically rigid property of metal. In contrast, the WPU-PPy textile shows a stable conductive performance under large elongation, however the electrical conductivity is four orders of magnitude lower than that of WPU-silver textile. Secondly, taking advantage of the ionic properties of WPU, we develop a self-healing elastomer through WPU/polyethylenimine (PEI) latex polyelectrolyte coacervation system, which contains opposite charges but is stable in water solution. Self-healing is achieved via water through two types of non-covalent bonds: ionic interaction between WPU and PEI, and polymer entanglement of WPU itself. This WPU-PEI dispersion can be combined with conductive filler such as silver flakes for printable self-healing soft antenna, indicating the potential applications in soft electronics industries. Finally, we replace the positively charged PEI with negatively charged poly methacrylic acid sodium salt (PMANa) to functionalize the WPU dispersion. The WPU-PMANa film shows a sharp change in transparency under mechanical strain, which can be used as robust mechanoresponsive smart windows. Additionally, the polyurethane smart window is multi-functional, its potential applications in the field of camouflage and dynamic optical gratings have been explored.