The Asian-White Leadership Gap: Interpersonal and Intrapersonal Explanations Based on Leader and Follower Stereotypes 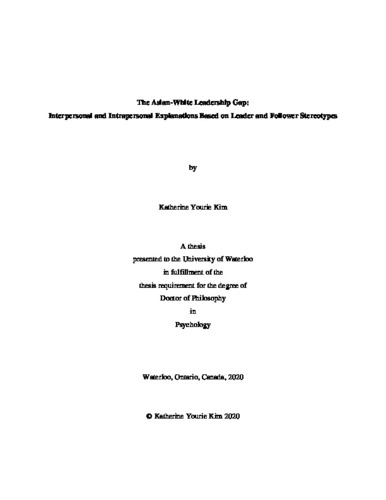 Despite demonstrating high levels of academic and professional competence, Asians are underrepresented in North American organizational leadership roles. The limited research on this issue has found that Asian Americans are perceived by others, and by themselves, as poorer leaders than White Americans; however, the reasons underlying these perceptions are poorly understood. As a result, in my research, I examine the mechanisms that may contribute to this Asian-White leadership gap, both from an interpersonal (Essay 1) and intrapersonal (Essay 2) perspective. Namely, I argue that both other- and self-perceptions that Asians are less suited for leadership roles than Whites may be due to a perceived mismatch between traits underlying Asian stereotypes (e.g., compliant) and traits commonly associated with leaders (e.g., assertive), as well as a perceived match between stereotypes surrounding Asians’ industry and the traits of an ideal follower (e.g., hardworking). In Essay 1, across four experiments, I find some unexpected evidence for an Asian leadership advantage, rather than a disadvantage, that is driven by perceptions by others that Asian Americans are more industrious and dutiful than White Americans (i.e., the traits of an ideal follower). At the same time, two field studies in Essay 2 revealed a weaker desire among Asians for leadership roles than Whites, which was driven by Asians perceiving themselves as more conforming, in line with Asian stereotypes, and less intelligent and more incompetent, counter to Asian stereotypes, than Whites. Overall, this research further substantiates the paradox behind the underrepresentation of Asians in North American organizational leadership roles and uncovers additional complexities to this issue that warrants greater future examination.