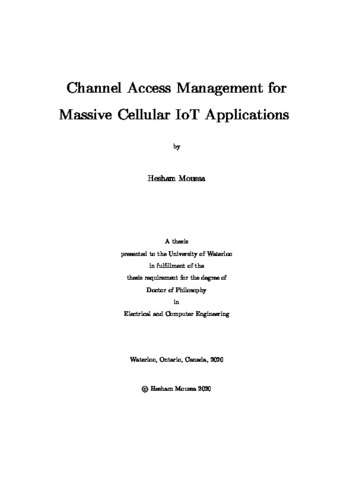 As part of the steps taken towards improving the quality of life, many of everyday life activities as well as technological advancements are relying more and more on smart devices. In the future, it is expected that every electric device will be a smart device that can be connected to the internet. This gives rise to the new network paradigm known as the massive cellular IoT, where a large number of simple battery powered heterogeneous devices are collectively working for the betterment of humanity in all aspects. However, different from the traditional cellular based communication networks, IoT applications produce uplink-heavy data traffic that is composed of a large number of small data packets with different quality of service (QoS) requirements. These unique characteristics pose as a challenge to the current cellular channel access process and, hence, new and revolutionary access mechanisms are much needed. These access mechanisms need to be cost-effective, enable the support of massive number of devices, scalable, practical, and energy and radio resource efficient. Furthermore, due to the low computational capabilities of the devices, they cannot handle heavy networking intelligence and, thus, the designed channel access should be simple and light. Accordingly, in this research, we evaluate the suitability of the current channel access mechanism for massive applications and propose an energy efficient and resource preserving clustering and data aggregation solution. The proposed solution is tailored to the needs of future IoT applications. First, we recognize that for many anticipated cellular IoT applications, providing energy efficient and delay-aware access is crucial. However, in cellular networks, before devices transmit their data, they use a contention-based association protocol, known as random access channel procedure (RACH), which introduces extensive access delays and energy wastage as the number of contending devices increases. Modeling the performance of the RACH protocol is a challenging task due to the complexity of uplink transmission that exhibits a wide range of interference components; nonetheless, it is an essential process that helps determine the applicability of cellular IoT communication paradigm and shed light on the main challenges. Consequently, we develop a novel mathematical framework based on stochastic geometry to evaluate the RACH protocol and identify its limitations in the context of cellular IoT applications with a massive number of devices. To do so, we study the traditional cellular association process and establish a mathematical model for its association success probability. The model accounts for device density, spatial characteristics of the network, power control employed, and mutual interference among the devices. Our analysis and results highlight the shortcomings of the RACH protocol and give insights into the potentials brought on by employing power control techniques. Second, based on the analysis of the RACH procedure, we determine that, as the number of devices increases, the contention over the limited network radio resources increases, leading to network congestion. Accordingly, to avoid network congestion while supporting a large number of devices, we propose to use node clustering and data aggregation. As the number of supported devices increases and their QoS requirements become vast, optimizing node clustering and data aggregation processes becomes critical to be able to handle the many trade-offs that arise among different network performance metrics. Furthermore, for cost effectiveness, we propose that the data aggregator nodes be cellular devices and thus it is desirable to keep the number of aggregators to minimum such that we avoid congesting the RACH channel, while maximizing the number of successfully supported devices. Consequently, to tackle these issues, we explore the possibility of combining data aggregation and non-orthogonal multiple access (NOMA) where we propose a novel two-hop NOMA-enabled network architecture. Concepts from queuing theory and stochastic geometry are jointly exploited to derive mathematical expressions for different network performance metrics such as coverage probability, two-hop access delay, and the number of served devices per transmission frame. The established models characterize relations among various network metrics, and hence facilitate the design of two-stage transmission architecture. Numerical results demonstrate that the proposed solution improves the overall access delay and energy efficiency as compared to traditional OMA-based clustered networks. Last, we recognize that under the proposed two-hop network architecture, devices are subject to access point association decisions, i.e., to which access point a device associates plays a major role in determining the overall network performance and the perceived service by the devices. Accordingly, in the third part of the work, we consider the optimization of the two-hop network from the point of view of user association such that the number of QoS satisfied devices is maximized while minimizing the overall device energy consumption. We formulate the problem as a joint access point association, resources utilization, and energy efficient communication optimization problem that takes into account various networking factors such as the number of devices, number of data aggregators, number of available resource units, interference, transmission power limitation of the devices, aggregator transmission performance, and channel conditions. The objective is to show the usefulness of data aggregation and shed light on the importance of network design when the number of devices is massive. We propose a coalition game theory based algorithm, PAUSE, to transform the optimization problem into a simpler form that can be successfully solved in polynomial time. Different network scenarios are simulated to showcase the effectiveness of PAUSE and to draw observations on cost effective data aggregation enabled two-hop network design.