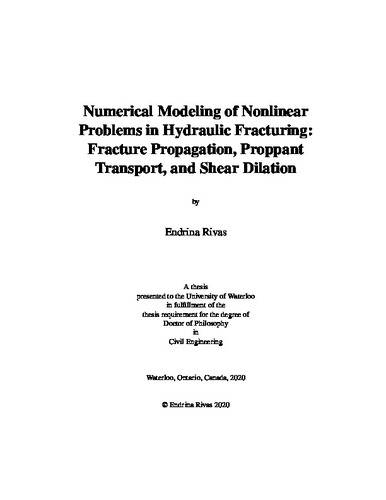 Hydraulic fracturing is a stimulation technique in which fluid is injected at high pressure into low-permeability reservoirs to create a fracture network for enhanced production of oil and gas. It is the primary purpose of hydraulic fracturing to enhance well production. The three main mechanisms during hydraulic fracturing for oil and gas production which largely impact the reservoir production are: (1) fracture propagation during initial pad fluid injection, which defines the extent of the fracture; (2) fracture propagation during injection of proppant slurry (fluid mixed with granular material), creating a propped reservoir zone; and (3) shear dilation of natural fractures surrounding the hydraulically fractured zone, creating a broader stimulated zone. The thesis has three objectives that support the simulation of mechanisms that lead to enhanced production of a hydraulically-fractured reservoir. The first objective is to develop a numerical model for the simulation of the mechanical deformation and shear dilation of naturally fractured rock masses. In this work, a two-dimensional model for the simulation of discrete fracture networks (DFN) is developed using the extended finite element method (XFEM), in which the mesh does not conform to the natural fracture network. The model incorporates contact, cohesion, and friction between blocks of rock. Shear dilation is an important mechanism impacting the overall nonlinear response of naturally fractured rock masses and is also included in the model---physics previously not simulated within an XFEM context. Here, shear dilation is modeled through a linear dilation model, capped by a dilation limiting displacement. Highly nonlinear problems involving multiple joint sets are investigated within a quasi-static context. An explicit scheme is used in conjunction with the dynamic relaxation technique to obtain equilibrium solutions in the face of the nonlinear constitutive models from contact, cohesion, friction, and dilation. The numerical implementation is verified and its convergence illustrated using a shear test and a biaxial test. The model is then applied to the practical problem of the stability of a slope of fractured rock. The second objective is to develop a numerical model for the simulation of proppant transport through planar fractures. This work presents the numerical methodology for simulation of proppant transport through a hydraulic fracture using the finite volume method. Proppant models commonly used in the hydraulic fracturing literature solve the linearized advection equation; this work presents solution methods for the nonlinear form of the proppant flux equation. The complexities of solving the nonlinear and heterogeneous hyperbolic advection equation that governs proppant transport are tackled, particularly handling shock waves that are generated due to the nonlinear flux function and the spatially-varying width and pressure gradient along the fracture. A critical time step is derived for the proppant transport problem solved using an explicit solution strategy. Additionally, a predictor-corrector algorithm is developed to constrain the proppant from exceeding the physically admissible range. The model can capture the mechanisms of proppant bridging occurring in sections of narrow fracture width, tip screen-out occurring when fractures become saturated with proppant, and flushing of proppant into new fracture segments. The results are verified by comparison with characteristic solutions and the model is used to simulate proppant transport through a KGD fracture. The final objective is to develop a numerical model for the simulation of proppant transport through propagating non-planar fractures. This work presents the first monolithic coupled numerical model for simulating proppant transport through a propagating hydraulic fracture. A fracture is propagated through a two-dimensional domain, driven by the flow of a proppant-laden slurry. Modeling of the slurry flow includes the effects of proppant bridging and the subsequent flow of fracturing fluid through the packed proppant pack. This allows for the simulation of a tip screen-out, a phenomenon in which there is a high degree of physical interaction between the rock deformation, fluid flow, and proppant transport. Tip screen-out also leads to shock wave formation in the solution. Numerical implementation of the model is verified and the model is then used to simulate a tip screen-out in both planar and non-planar fractures. An analysis of the fracture aperture, fluid pressure, and proppant concentration profiles throughout the simulation is performed for three different coupling schemes: monolithic, sequential, and loose coupling. It is demonstrated that even with time step refinement, the loosely-coupled scheme fails to converge to the same results as the monolithic and sequential schemes. The monolithic and sequential algorithms yield the same solution up to the onset of a tip screen-out, after which the sequential scheme fails to converge. The monolithic scheme is shown to be more efficient than the sequential algorithm (requiring fewer iterations) and has comparable computational cost to the loose coupling algorithm. Thus, the monolithic scheme is shown to be optimal in terms of computational efficiency, robustness, and accuracy. In addition to this finding, a robust and more efficient algorithm for injection-rate controlled hydraulic fracturing simulation based on global mass conservation is presented in the thesis.