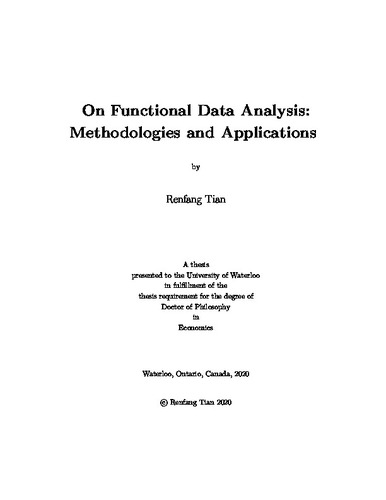 In economic analyses, the variables of interest are often functions defined on continua such as time or space, though we may only have access to discrete observations -- such type of variables are said to be ``functional'' (Ramsay, 1982). Traditional economic analyses model discrete observations using discrete methods, which can cause misspecification when the data are driven by functional underlying processes and further lead to inconsistent estimation and invalid inference. This thesis contains three chapters on functional data analysis (FDA), which concerns data that are functional in nature. As a nonparametric method accommodating functional data of different levels of smoothness, not only does FDA recover the functional underlying processes from discrete observations without misspecification, it also allows for analyses of derivatives of the functional data. Specifically, Chapter 1 provides an application of FDA in examining the distribution equality of GDP functions across different versions of the Penn World Tables (PWT). Through our bootstrap-based hypothesis test and applying the properties of the derivatives of functional data, we find no support for the distribution equality hypothesis, indicating that GDP functions in different versions do not share a common underlying distribution. This result suggests a need to use caution in drawing conclusions from a particular PWT version, and conduct appropriate sensitivity analyses to check the robustness of results. In Chapter 2, we utilize a FDA approach to generalize dynamic factor models. The newly proposed generalized functional dynamic factor model adopts two-dimensional loading functions to accommodate possible instability of the loadings and lag effects of the factors nonparametrically. Large sample theories and simulation results are provided. We also present an application of our model using a widely used macroeconomic data set. In Chapter 3, I consider a functional linear regression model with a forward-in-time-only causality from functional predictors onto a functional response. In this chapter, (i) a uniform convergence rate of the estimated functional coefficients is derived depending on the degree of cross-sectional dependence; (ii) asymptotic normality of the estimated coefficients can be obtained under proper conditions, with unknown forms of cross-sectional dependence; (iii) a bootstrap method is proposed for approximating the distribution of the estimated functional coefficients. A simulation analysis is provided to illustrate the estimation and bootstrap procedures and to demonstrate the properties of the estimators.