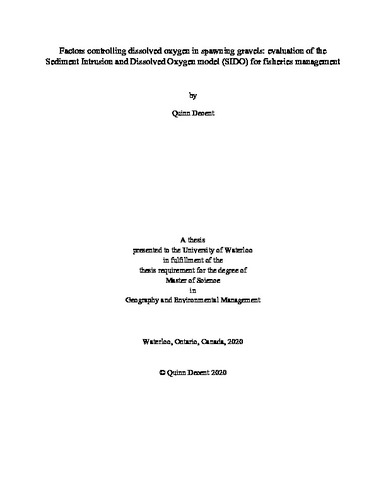 Natural and anthropogenic landscape disturbance pressures have accelerated the transfer of fine sediment to streams in forested headwater regions of the eastern slopes of the Rocky Mountains. The accumulation of fine sediment in spawning gravels can reduce survival rates of salmonid eggs by decreasing intragravel flow velocities and dissolved oxygen concentrations. The goal of this study was to examine the effect of fine sediment intrusion on the abiotic characteristics of the salmonid redd and assess the potential consequences for egg development and survival using a physically based numerical model SIDO (Sediment Intrusion and Dissolved Oxygen). Field observations from the Crowsnest River, Alberta, Canada were used to calibrate the model using flow, suspended solids and sediment accumulation data as well as high frequency dissolved oxygen (DO) measurements in spawning gravels. The impact of varying sediment inputs upon sediment intrusion rates, abiotic redd characteristics and fish egg survival rates were assessed using SIDO. Dissolved oxygen concentrations in redds were highly variable both within and between sites and varied with observed changes in river discharge and suspended sediment concentrations. Trends in measured and modelled DO concentrations in redds were generally comparable, reflecting a general decrease in dissolved oxygen levels in spawning gravels over the study period. SIDO was not sensitive to measured short term fluctuations of DO and modelled predictions of DO were higher than measured values. The quantities of sediment ingress predicted by SIDO were lower by an order of magnitude than those measured in ingress baskets. Differences between observed and modelled DO are related to the fact that this physically based model does not include terms that describe the effects of groundwater and biotic (microbial) processes on dissolved oxygen in spawning gravels. The potential of SIDO as a tool for fisheries management will be enhanced by including terms that describe groundwater and microbial processes that influence spawning gravel DO dynamics.