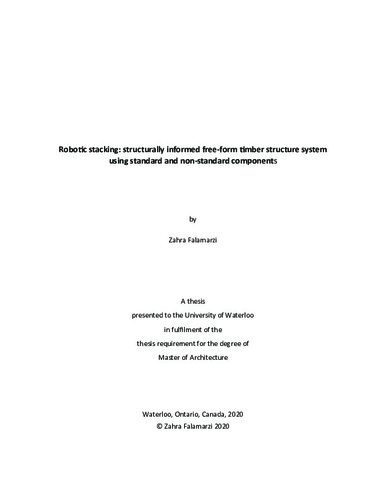 This thesis is based on the hypothesis that the synchronization of digital design and robotic fabrication can result in new architectural possibilities. The research investigates differentiation and variability in the design of a structurally informed timber structure. This structure takes advantage of additive stacking through the robotic assembly of generic building elements. The aim of the project is to establish a closer link between robotic design research and contemporary building practice. This aim is achieved by developing an integrative approach to both structure and aesthetic potential through an optimized hybrid system using both standard and non-standard (easily manipulated during fabrication) components. The idea is to create complex geometries and differentiation while benefiting from the concepts of automation and repeatability. The research considers several precedents, such as works by Gramazio and Kohler’s research group at ETH Zurich. These projects were successful in using the unique capacity of industrial robots for precise positioning to control a large number of elements. Put simply, the industrial robot was employed as a means of design exploration rather than as a means of productivity. The robot was used where its digital controls became vital for applying the design, which could be considered the main purpose of robotic fabrication in architecture. In this thesis, a construction method is developed for producing unique, complex geometrical forms of architectural elements, such as wall, roof, etc. Real-world parameters (materiality, construction, economy, and environmental concerns) are considered as important criteria driving the design in order to address common building practices. Essential parameters and limitations, extracted from a study of material choices, fabrication methods, and building-component specifications and requirements, shaped a set of rules that formed the hybrid structural design system of innovative “T” configuration modules. The robotic-based assembly process, its corresponding design criteria, and the proposed system are examined through two physical experiments: the wall structure as a fundamental building element and the bench as a furniture structure, in order to validate the hypothesis that an articulated building component is achievable out of basic materials. The results present a new form of “digital craft” that could potentially impact conventional building practice. In summary, the proposed robotic-based production method, with its digital, parametric logic, provides possibilities for the structural system to be adopted at various scales and applied in different orientations, resulting in diverse architectural functions in a building-scale solution.