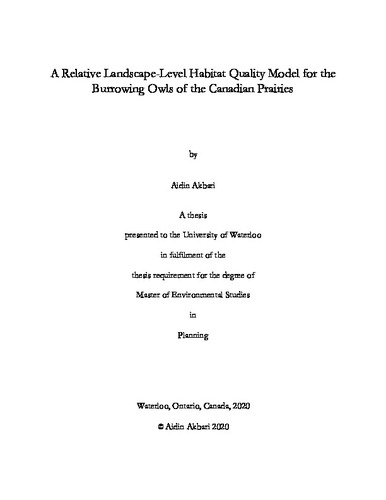 The range and population of the Burrowing Owls as flagship migratory species of the open prairie landscape are in decline across the northernmost portion of their global range in Canada. Multiple sources of degradation, including those induced by human footprint, are attributed to this declining trend. Yet the degradation caused by these factors is yet to be quantified and mapped at the landscape-level. Using the InVEST habitat quality model, the habitat quality values for these endangered birds were quantified, mapped, and evaluated across both the historic and current ranges of these species in the Canadian Prairie ecosystem. In doing so, four different general categories of disturbance, namely the modified landscape, transportation network, urban areas, and energy infrastructure were considered. Also, variations of habitat quality values were modelled across the current range of these species upon the consideration of the different combinations of these sources of disturbance at this spatial extent. The results of the study illustrate that despite the differences in the relative habitat quality values between the historic and current ranges of Burrowing Owls, these variations are not statistically significant between the two ranges when all sources of degradation are considered concurrently in the study area. Across the current range, also, the difference in habitat quality values is not statistically significant between the considered scenarios, even when specific habitat patches are assessed. Nevertheless, the habitat quality was most affected by the transportation network data layer, followed by the energy and urban data layers. Consequently, the delineated spatial sources of disturbance can only be considered to have intensified the synergistic association between the other factors attributed to the decline of these species including the prolonged impact of grassland iv conversion activities of the past, which has altered the configurational characteristics of the landscape, as well as to the other environmental factors affecting the population of these endangered species across the study area and beyond. Considering the existing composition of land use/cover and share of specified sources of disturbance in habitat quality degradation across the current range of Burrowing Owls, conservation measures can be applied beyond the designated critical habitat boundaries for these species to preclude the potential future impacts of these sources of degradation. Further studies are still required to assess habitat quality values under the anthropogenic sources of degradation beyond the considered spatial extent and with regard to the other sources of disturbance across the global range of these species.