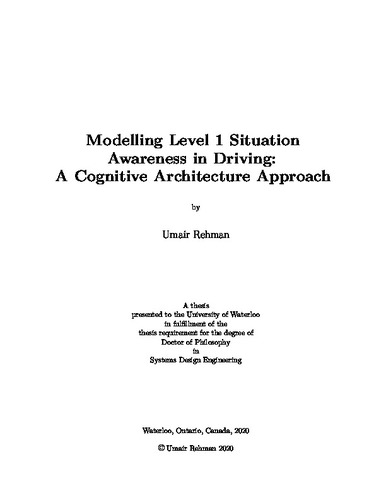 The goal of this research is to computationally model and simulate the collective drivers’ Level I Situation Awareness (SA). I developed a computational model in a cognitive architecture that can interact with a driving simulator to infer quantitative predictions of drivers’ SA. I demonstrate theoretical application of modelling and predicting SA from the lens of human cognition utilizing the Queueing Network-Adaptive Control of Thought Rational (QN-ACT-R) framework as a foundation. I integrated a dynamic visual sampling model (SEEV) with QN-ACT-R to create QN-ACT-R-SA which simulates realistic attention allocation patterns of human drivers at SA Level 1 (i.e. perception of critical elements). QN-ACT-R-SA also incorporates a driver model that can simulate human driving behaviors by interacting with a driving simulator. Three validation studies (Study I, II and III) were conducted to determine whether Level 1 SA results produced with the QN-ACT-R-SA model correspond to empirical data collected from human drivers for the same tasks. In Study I, QN-ACT-R-SA model was validated against probe-based SA measures and in Study II, the model was validated against a hazard perception-based SA measure. In Study III, model’s predictive power was assessed by comparing model results to a previously conducted empirical experiment. In Study I, two types of probe-based SA measures were used: within-task queries using Situation Awareness Global Assessment Technique (SAGAT), and post-experiment questions. A comparative assessment demonstrated that QN-ACT-R-SA could reasonably simulate drivers’ Level 1 SA for two driving conditions: easy (with few vehicles and signboards) and complex (with dense traffic and signboards). QN-ACT-R-SA fit for human SAGAT scores resulted in mean absolute percentage error (MAPE) of 5.02%, and the root mean square error (RMSE) of 3.47. Model fit for post-experiment human SA results were MAPE of 6.73%, and RMSE of 6.13. The RMSE of 3.47 for SAGAT responses indicate a small error difference between the average human and modelling results since the average SAGAT scores (measured on a scale of 0-100) for the easy and complex driving condition is around 71.9 (SD: 21.1). Similarly, the RMSE of 6.13 for post-experiment SA questionnaire also indicates a small error difference since the average post-experiment SA questionnaire score (on a scale of 0-100) for the easy and complex driving condition is around 73.8 (SD: 16.2). In Study II, Brake Perception Response Time (BPRT) was used as a hazard perception test to further assess the model’s ability to simulate drivers’ SA at Level 1. An empirical study was designed mainly for model validation purposes. In the trials runs, the participants encountered two major types of hazards: on-road hazards in the forward view of the driver and roadside hazard which originated from the driver’s periphery. The two contrasting conditions were selected to explore the difference in driver’s BPRT. The results demonstrated that BPRT was significantly shorter for on-road hazards as compared to roadside hazards. The overall model fitness for empirical BPRT results indicated an MAPE of 9.4 % and the RMSE of 0.13 seconds. The RMSE value in Study II indicates a small error difference between the average human and modelling results since the average BPRT for the two on-road and roadside hazard conditions is around 1.49 seconds (SD: 0.54). Study III involved extending the same modelling approach towards assessing the predictive power of QN-ACT-R-SA. The empirical data was taken from a previously conducted research study that had examined the effects of Adaptive Cruise Control (ACC) and cellphone use on drivers’ SA using SAGAT tests. QN-ACT-R-SA fit for predicting the effects of ACC and cellphone use on drivers’ Level 1 SA resulted in a MAPE of 5.6%, and the RMSE of 4.9. The RMSE of 4.9 for SAGAT responses indicates a small error difference between the average human and modelling results since the average SAGAT scores for the different driving conditions in Study III is around 72 (SD: 4.76). Both absolute (MAPE) and relative (RMSE) measures of goodness-of-fit confirm models efficacy in reasonably simulating human SA across the three studies. The MAPE value of less than 10% across the three studies show that the model’s deviation from the empirical results in terms of percentage error is relatively small. The graphical analysis of the average model versus average human plots further indicate that the model was able to successfully map the changes in SA scores across the different experimental conditions tested in the three studies. In summary, this research presents: 1) a model of collective drivers’ Level 1 SA that is grounded in cognitive and perceptual mechanisms of human information processing; 2) a real-time programmable implementation of the model as a simulation software; 3) validation of the model using empirical results drawn from established SA measures; and 4) new ideas towards modelling Level 2/3 SA and improving the existing modelling paradigm.