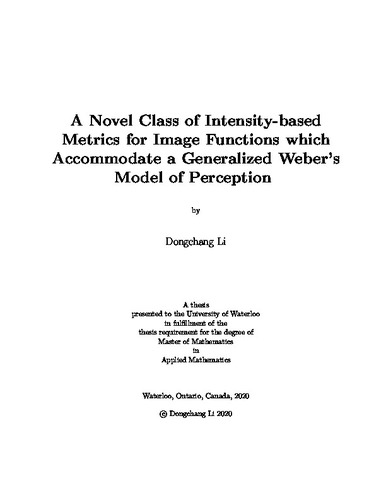 Even though the usual L2 image fidelity measurements, such as MSE and PSNR, characterize the mean error for each pixel of the images, these traditional measurements are not designed to predict human visual perception of image quality. In other words, the standard L2-type optimization in the context of best approximation theory is not in accordance with human visual system. To provide alternative methods of measuring image distortion perceptually, the structural similarity image quality measure (SSIM) was established decades ago. In this thesis, we are concerned with constructing a novel class of metrics via intensity-based measures, which accommodate a well-known psychological model, Weber's model of perception, by allowing greater deviations at higher intensity values and lower deviations at lower intensity values. The standard Weber model, however, is known to fail at low and high intensities, which has given rise to a generalized class of Weber models. We have derived a set of "Weberized'' distance functions which accommodate these generalized models. Mathematically, we prove the existence and uniqueness of the density functions associated with the measures which conform to generalized Weber's model of perception. Meanwhile, we consider the generalized Weber-based metrics as the optimization criteria and implement them in best approximation problems, where we also prove the existence and uniqueness of best approximations. We compare the results, which are theoretically adapted to the human visual system, with best L2-based approximations. Using a functional analysis point of view, we examine the stationary equations associated with the generalized Weber-based metrics to arrive at the Fréchet derivatives of these metrics. Finally, we establish an existence-uniqueness theorem of best generalized Weber-based L2 approximations in finite-dimensional Hilbert spaces.