Development of Electrodes and Coatings for Sodium Ion Energy Storage 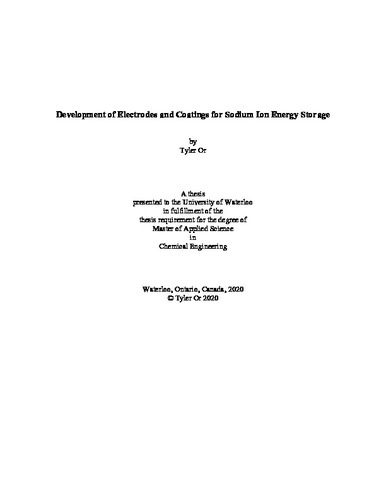 Sodium-ion energy storage technologies have recently garnered interest due to potential constraints in the supply of lithium in the distant future assuming that lithium-ion batteries (LIBs) are widely adopted for large-scale applications (i.e., electric vehicles and stationary energy storage). Sodium-ion batteries (SIBs) possess an identical chemistry and operating mechanism to LIBs, and thus strategies from extensive LIB development are directly translatable. However, replacing Li+ with Na+ as the charge carrier presents significant challenges, notably the poor intercalation/de-intercalation reversibility in the host lattice and sluggish solid-state Na+ diffusion kinetics due to the relatively large size of the Na+ ion. It is critical to develop cathode materials that demonstrate high energy output and good reversibility, while being comprised of low-cost and abundant materials. On the other hand, hybrid Na-ion capacitors (NICs) are a different class of secondary energy storage designed to bridge the performance gap between SIBs and electric double-layer capacitors (EDLCs). They typically comprise of an insertion electrode and a carbonaceous capacitive electrode in an organic (carbonate-based) electrolyte and can deliver 3-4 times the energy density compared to EDLCs albeit with lower rate performance (energy output at high current) and cycle stability. However, while commercial supercapacitors are stable over millions of charge-discharge cycles, few reports in the literature on NICs demonstrate a capacity retention ≥90% over 10,000 cycles. The design, preparation, and improvement of novel insertion electrodes to match suitable capacitive electrodes is urgently required to develop NICs, which can occupy a unique sector in the secondary energy storage market. SIBs that utilize Mn-rich cathodes (based on NaxMnO2) can meet the criteria of high energy output and low cost; however, reliance on the Mn3+/Mn4+ redox is associated with poor cycle stability due to Jahn-Teller induced distortion from the Mn3+ ion. This issue can be mitigated by partially substituting Mn with Mg. With this in mind, we systematically assessed the performance of layered P2-Na2/3Mn1-yMgyO2 at y = 0, 0.05, and 0.1 synthesized using a modified Pechini method. In the interest of maximizing the energy density of the material, we used high upper cut-off voltages of 4.5 V, 4.6 V, and 4.7 V vs Na/Na+, which is typically not explored in the literature. Na2/3Mn0.95Mg0.05O2 displayed a similar initial discharge capacity to Na2/3MnO2 with significant improvements in cycle retention. It was most promising when cycled between 2 – 4.5 V, retaining 140 mAh g-1 (82% retention) and 116 mAh g-1 (68% retention) after 50 and 100 cycles respectively at low current. A higher Mg dopant quantity led to improvements in cyclability and rate performance albeit with lower initial discharge capacity. Electrochemical and physical (ex-situ XRD) characterization was used to delineate the role of high-voltage phase transitions, SEI layer formation, electrolyte solvent insertion into sodium slabs, and active material degradation/dissolution toward capacity loss. Overall the high capacity, stability, and environmentally benign composition of the P2-Na2/3Mn1-yMgyO2 cathode is promising for the development of SIBs. In my second contribution, I synthesized and assessed Na2CoPO4F (NCPF) as an insertion anode for NICs for the first time with commercial activated carbon (AC) as the capacitive cathode. The constructed NCPF//AC NIC exhibited exceptional rate performance, retaining 78% of its energy density (corresponding to 24 Wh kg−1) when the power density was ramped from 125 to 5000 W kg−1. In addition, its long-term stability when cycled from 0 – 3 V is among the highest reported in the literature, retaining 93% of its energy density (24 Wh kg−1) after 100,000 cycles at 1 kW kg−1. Furthermore, at an elevated voltage range of 0–3.25 V, the NIC retained 80% of its energy density (26 Wh kg−1) after 30,000 cycles at 375 W kg−1. The performance is ascribed to the kinetic compatibility between the adsorptive cathode and pseudocapacitive anode, where pseudocapacitance is enhanced by the nanosized morphology on the surface of NCPF. The NIC system reported herein demonstrates supercapacitor-type benchmarks while also possessing a higher energy density. Lastly, I tested alucone and titanicone organometallic coatings on P2-Na2/3Ni0.23Mn2/3Cu0.1O2 SIB electrodes to improve the cycle stability. When cycled from 2 – 4.5 V vs Na/Na+ at low current, the coatings demonstrated evidence of suppressing electrolyte decomposition; however, they did not improve the overall cycle stability. At this voltage range, degradation was predominated by the irreversible P2-O2 phase transition (onset ~4.22 V). However, the suppressed electrolyte decomposition resulted in improved rate performances of the coated samples. Alucone was less electronically conductive and thus less electrolyte-reactive than titanicone. At elevated currents from 2 – 4.5 V, electrolyte decomposition and the high-voltage P2-O2 phase transition were kinetically suppressed, and thus stability was predominated by particle cracking, surface exfoliation, and fractured connectivity. Here, the coatings substantially improved the cycle retention by maintaining the overall integrity of the electrode. After 500 cycles, the pristine electrode decayed entirely, suggesting significant losses of interconnectivity between the active particles, carbonaceous matrix, and current collector, while the electrodes coated with alucone and titanicone retained 81% and 70% capacity respectively. When cycled from 1.5 – 4.1 V vs Na/Na+ at low current, the P2-O2 phase transition was avoided while the Mn3+/Mn4+ became active. In this scenario, the coatings significantly improved cycle retention by suppressing Mn dissolution.