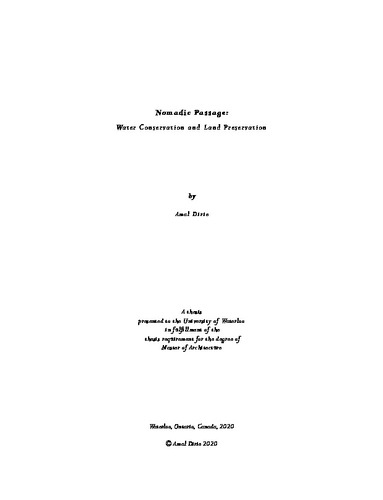 “Nomadic Passage: Water Conservation and Land Preservation” investigates the dynamic and sustainable qualities of Somali nomadic life, in regards to their livelihood, communal spaces, and traditional practices that are under extreme threat from the effects of climate change. These unstable conditions have resulted in decreased human stewardship on the nomads’ traditional environments. Nomadic life is reliant on landscape conditions that are well managed and maintained. Roughly half of the population of Somaliland still lives nomadically; however, recurrent droughts have caused millions of deaths due to water scarcities, famine, and growing food insecurities. Overgrazing and overusing resources without considering how to replenish the soil or replant uprooted vegetation are the main reasons responsible for the increased desert conditions. Therefore, newfound scarcity in sustenance compels nomads to migrate towards the city in search of better situations to sustain themselves and their camels. Yet, they are not accustomed to or equipped for the demands of urban life. Throughout time Somali nomads have moved their huts to places that had enough water and frequent rains. The Somali hut symbolized a pivotal artifact that adjusted to the abrupt shifts and changes within the environment. The hut and its craft magnify the status of nomadic women in establishing a firm and rooted culture. “One could consider the architecture of nomadism like quilts that emerge from the intimate world of female kinships, friendships and rituals.” Women are responsible for every genuine aspect of the hut, from its dynamic nature to its profound beauty. Nomads are bound in a cyclical pattern of laying down their foundations during prosperous seasons. In times of hardship, they dismantle their homes and possessions to proceed on camel-back and seek more favorable conditions. Their entire lives are engaged in the know-how of “transhumance,” referring to the term of pastoralists moving in concert with their livestock between fixed grazing areas. The lack of water and available land resources will threaten their wellbeing along with the lives of their animals. Eventually, eradicating the ancient practices of nomadism and their footprint on the land. The presence and absence of water create a repetitive narrative within these environments. Water displays natural and discarded materials along its course, where seasonal rivers and episodes of flash flooding from rainy seasons sculpt the Earth. And during dry seasons, the absence of water leaves deep, sunken scars on the land, simultaneously scarring nomadic life. We can view the journey of water in a similar light to the passage of the Somali nomads. Both move through different thresholds and embrace the characteristics of their surroundings. On a site close by one of the nomad dwelling sites, I am designing a public pavilion modeled on the framework of existing infrastructure, such as dug wells and boreholes. My project amplifies connections between the everyday act of obtaining water and imprinting foundational narratives, primarily focusing on the significance of oral poetry in Somali culture. The problem is that today drilled wells have lost their social and cultural dimension as a space of gathering, and their edges aren’t safe to linger around. Watering wells were prime social areas for nomads and pastoralists to congregate and recite their poems from memory to an audience ever eager to listen. Oral traditions such as songs and poetry continue to be creative forms that encompass all aspects of their lives, a tool for nomads and pastoralists to document and record their history. The design seeks to incorporate the complexities found within this cumulative knowledge of the landscape and the elusive nature of water. The metamorphic qualities of water and the kinetic energy of nomadism should be viewed in tandem and considered within a temporal framework of time. Citation: Prussin, Labelle. 1995. African Nomadic Architecture : Space, Place, and Gender. Washington: Smithsonian Institution Press : National Museum of African Art.