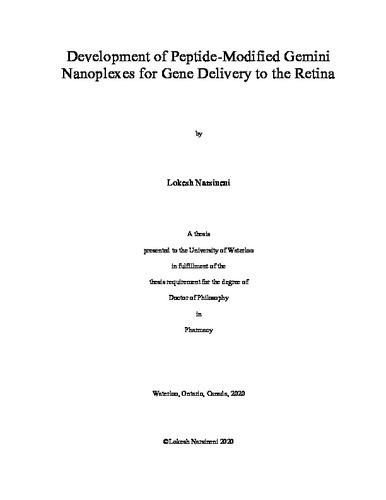 Glaucoma is a retinal neurodegenerative disease where the retinal ganglion cells (RGCs) suffer from damage and die over time due to multiple factors, including a persistently elevated intraocular pressure (IOP). Glaucoma is a leading cause of blindness worldwide, but with protective new treatments significant progress could be made to prevent and regenerate vision loss in patients. Current glaucoma management relies on reducing and maintaining IOP by pharmacological and invasive surgical treatments. Neuroprotective approaches have the potential to prevent RGC damage and could be essential to preserve vision in patients over time. Neurotrophic factors and other neuroprotective compounds have been shown to be useful, however, efficient and reliable delivery of these agents to the retina is still a major obstacle. One of the neurotrophic factors (NTFs), brain-derived neurotrophic factor (BDNF) has been shown to protect RGCs, but in glaucoma there is a local deficiency due to decreased retinal levels of both local and retrogradely transported NTFs. Gene therapy with BDNF-encoding gene could be a suitable approach to locally express BDNF in the retina long-term. We designed multifunctional non-viral peptide-targeted gemini surfactant-based gene delivery systems to deliver BDNF-encoding plasmid to retinal cells in vitro and in vivo. The main objective was to develop a new generation of nanoplex (NPX) system based on cell adhesion peptide (CAP)-modified dicationic gemini surfactants (m-s(p)-m) (m=C18) for targeted delivery of BDNF gene to the retina. First, a new synthesis method was developed for second generation m-7NH-m (m=C12 and C18) gemini surfactants which were then used as building blocks for conjugation of selected CAPs at the amino group in the spacer. The modified synthesis protocol was developed with a solvent-free, 4-Dimethylaminopyridine (DMAP)-free, one-pot synthetic scheme to synthesize m-7NH-m gemini surfactants with Boc2O protection, quaternization with 1-bromoalkanes and deprotection with trifluoroacetic acid cocktail to improve the purity of the m-7NH-m gemini surfactant. The new synthesis method provides a two-fold improved yield and the production of a pure species of m-7NH-m without DMAP and trimeric m-7N(m)-m surfactants as impurities. Also, for the first time, a one-pot method for the synthesis of trimeric gemini surfactants (bis-quaternary trimeric (m-7N(m)-m) (m=16 and 18)) was developed. Second, using m-7NH-m gemini surfactants as building blocks two integrin-binding (p1-2) and three immunoglobulin superfamily (IgSF)-peptide (p3-5) modified m-sN(p1-5)-m gemini surfactants (m-alkyl tail [12-18C], s-spacer 7C with amino-peptide substitution) were synthesized and purified. Nanoplexes (NPXs), lipoplexes (LPXs), peptide-modified nanoplexes (pNPXs) and peptide-modified lipoplexes (pLPXs) of dimeric, trimeric second generation gemini surfactants and peptide-conjugated m-7N(p1-5)-m third generation gemini surfactants with gWIZ-GFP plasmid were formulated and optimized with and without 1,2-dioleyl-sn-glycero-3-phosphotidylethanolamine (DOPE) helper lipid, respectively, at various charge ratios and characterized for particle size , zeta potential, transfection efficiency and toxicity in A7 astrocytes using flow cytometry and confocal microscopy. Third, the NPXs and LPXs were evaluated both in vitro and in vivo: for corneal interactions in MatTek EpiCorneal® tissue equivalent model, for transfection efficiency in a 3D environment using MiEye8 retinal neurospheres, and for delivery and transfection ability in vivo. In the in vivo CD1 mouse model 18-7N(p3)-18 pNPXs administered by IVT injection delivered tdTomato/BDNF plasmid to retinal cells and produced higher gene expression than the 18-7N(p1)-18 pNPXs, the parent 18-7NH-18 NPXs and Lipofectamine® 3000 as demonstrated by confocal microscopy of whole mount retinas. The BDNF gene expression, assessed by ELISA, showed significantly high levels of BDNF with 18-7N(p3)-18 (422.60 ± 42.60pg/eye), followed by 18-7N(p1)-18 pNPXs (230.62 ± 24.47pg/eye), 18-7NH-18 NPXs (245.90 ± 39.72pg/eye), Lipofectamine® 3000 (199.99 ± 29.90 pg/eye) and untreated controls (131.33 ± 20.30 pg/eye). In summary, the 18-7N(p3)-18 pNPXs induced 3.4-fold higher BDNF level compared to controls and 2-fold higher than 18-7N(p1)-18 pNPXs. Fourth, it was shown that Aβ colocalizes in the apoptotic RGCs in experimental glaucoma models and induces RGC apoptosis, targeting the Aβ pathway has resulted in reduction of RGC apoptosis and helped in the protection of RGCs from degeneration, previously it was reported that amphiphilic gemini surfactants have potential to inhibit Aβ aggregation. Hence, some complementary exploratory studies were carried out on the amyloid Aβ40 aggregation inhibition properties of some of the new peptide-gemini surfactants by a fluorescence kinetic assay and on the binding affinities of CAP-gemini surfactants by molecular modelling. In vitro Aβ40 peptide aggregation inhibition studies showed that 18-7N(p3)-18 and 18-7N(p1)-18 gemini surfactants have the potential to inhibit Aβ40 peptide aggregation and formation of higher order oligomers. In conclusion, the novel multifunctional IgSF peptide and integrin-binding peptide conjugated gemini NPXs provide a promising non-viral in vivo gene delivery approach to retinal cells. The pNPXs with CAPs from the neural IgSF represent a novel approach to non-viral gene delivery to the retina. The IgSF peptides are known to elicit a cell adhesion and binding interaction between the neural IgCAMs and have potential to engage in homophilic and heterophilic interaction with other cell surface proteins. This property of IgSF CAPs was exploited to improve the adhesion and delivery of pNPXs to the retinal cells by conjugating them on to gemini surfactant gene vectors. The conjugation of peptides to the 18-7NH-18 gemini surfactant and the pNPXs prepared from the IgSF peptide-modified gemini surfactants have enhanced transfection efficiency with low toxicity.