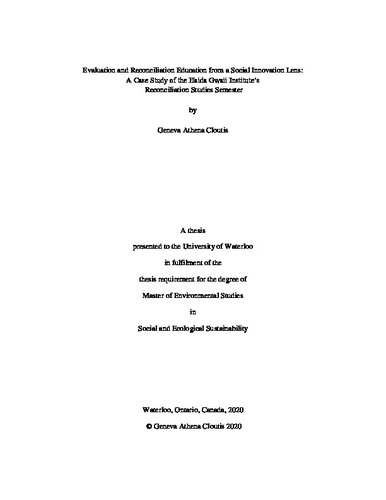 In 2015, the Truth and Reconciliation Commission of Canada released a report highlighting the impacts of residential schools on Indigenous people, and presented Calls to Action to redress this legacy and move forward on a path of reconciliation. Two years later, in 2017, the Haida Gwaii Institute (HGI) launched the Haida Gwaii Semester in Reconciliation Studies. Since 2010, the HGI has been offering educational programming on Haida Gwaii, British Columbia, the ancestral and unceded territory of the Haida Nation. This research is the result of a three year partnership with the HGI as they piloted and evaluated the Reconciliation Studies Semester (RSS). This work has been guided by the tenets of community-based participatory research (CBPR), which prioritizes relationships as the basis for meaningful research between communities and researchers (Leeuw, Cameron, & Greenwood, 2012). My relationship with the HGI has been fundamental in exploring the RSS and evaluating its strengths and challenges. In this work, the HGI expressed a desire to evaluate the RSS based on the challenges encountered during the program pilot that were not predicted when the program was developed in 2015. I sought to explore the application of social innovation tools for the purposes of program evaluation through document reviews, discussions, participant observation, and five separate visits to Haida Gwaii. I first developed a conceptual framework of best practice, which can theoretically be applied to any organization undertaking transformative education and program evaluation in cross-cultural, complex environments. This framework was developed by exploring four main bodies of literature: systems change and social innovation, transformative learning, critical Indigenous literature, and program evaluation. This framework was applied to the RSS initially without any context, to strictly compare the program to these best practice criteria. Then, I used a multi-level perspective framework to explore niche, regime, and landscape activities which took place between 2015 and 2018 and may have impacted the program (McGowan, Westley, & Tjornbo, 2017). These activities were then overlaid onto the best practice criteria to contextualize the strengths and challenges faced by the HGI when developing and piloting the program. Through this analysis, I determined that the RSS as a program sought to include a variety of perspectives from the Haida and Haida Gwaii communities, and utilized the concepts of Two-Eyed Seeing in the program. Two-Eyed Seeing allows Indigenous and Western epistemologies and pedagogies to be integrated and taught in the classroom without being juxtaposed or compared to one another (Iwama, Marshall, Marshall, & Bartlett, 2009). The most significant challenge faced by the RSS was developing a program evaluation, which they were unable to create simultaneously with curriculum due to capacity and expertise constraints. Finally, the national-level discussions on reconciliation fluctuated widely during this time period, which may have influenced student perception and experience (Laucius, 2017; Liberal Party of Canada, 2015). The findings emphasize the importance of building flexibility into program design, co-developing evaluation and program content, and including local perspectives to contextualize and ground the program in place. As the HGI moves forward, the lessons learned from the RSS will improve programming for the organization and can be used as a template for reconciliation-based education in the future.