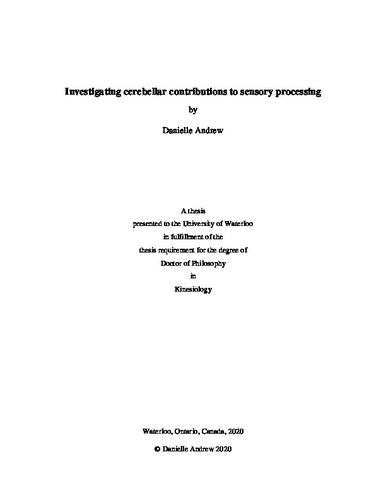 Over the last two decades, the long-standing view of the cerebellum as a motor structure has been challenged with evidence highlighting the presence of cerebellar activation during non-motor tasks and functional connectivity studies emphasizing the importance of cerebellar input to associative cortical regions. The cerebellum has been widely agreed to be involved in coordinated movement. To successfully perform a smooth movement, we need to be able to gather information that is pertinent to completing the goal at hand and ignore erroneous information, which could be thought of as attention. Many of these studies have localized the right lateral cerebellum as the node primarily responsible for coordination of more cognitively driven processes, due to connectivity with prefrontal and frontal regions. Although it is widely agreed that the cerebellum aids in coordination via state estimation mechanisms, how it exerts this influence over higher order processes is not well understood; this is in part due to the variability of results from lesion studies. The purpose of this thesis is to investigate the nature of the cerebellum’s influence on higher-order processes within a young, healthy population. The aim of the first study was to determine the cerebellum’s influence over sensory processing without the need for an explicit movement task. Following the transient disruption of cerebellar activity using continuous theta burst stimulation (cTBS), Study 1 identified that the cerebellum was involved in distinguishing differences between types of sensory stimuli as indexed by changes in cortical electrical activity measured through electroencephalography (EEG). Specifically, decreases in the mismatch negativity (MMN) in response to the presence of deviant stimuli following administration of cTBS was observed. The aim of Study 2 was to further probe this concept using a sensory conflict task, which incorporated two different modalities of stimuli. Following cTBS to the right lateral cerebellum, the increases in the tactile N70 and visual P2 cortical peaks in response to irrelevant and distractor stimuli may be an indication of participants becoming less likely to ignore distractor stimuli. This is further supported by the concomitant decreases seen in accuracy. The final study of this thesis sought to strengthen our understanding of the nature of the cerebellar influence over attentional processes by assessing laterality and changing the side of cerebellar stimulation to the left side. In this way, it can be validated that the alterations observed in the previous studies are due to the hypothesized influence of right-cerebellum to left-side frontal areas as opposed to overall cerebellar control of sensorimotor processing. A lack of change within both somatosensory and visual peaks, the N70 and P2 respectively, following stimulation of the left lateral cerebellum supports the specificity of the cerebellum’s influence. Together, these studies aid in our understanding of how the cerebellum exerts its influence on widespread, contralateral higher-order networks through the comparison of contextual sensory information. This work serves to broaden our understanding of how the cerebellum is involved in behaviours which encompass sensory processing, movement and cognition to execute purposeful behaviour.