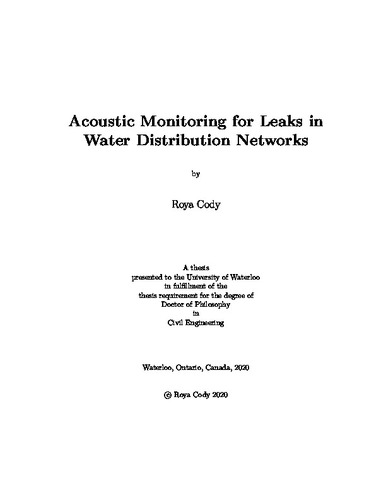 Water distribution networks (WDNs) are complex systems that are subjected to stresses due to a number of hydraulic and environmental loads. Small leaks can run continuously for extended periods, sometimes indefinitely, undetected due to their minimal impact on the global system characteristics. As a result, system leaks remain an unavoidable reality and water loss estimates range from 10\%-25\% between treatment and delivery. This is a significant economic loss due to non-revenue water and a waste of valuable natural resource. Leaks produce perceptible changes in the sound and vibration fields in their vicinity and this aspect as been exploited in various techniques to detect leaks today. For example, the vibrations caused on the pipe wall in metal pipes, or acoustic energy in the vicinity of the leak, have all been exploited to develop inspection tools. However, most techniques in use today suffer from the following: (i) they are primarily inspection techniques (not monitoring) and often involve an expert user to interpret inspection data; (ii) they employ intrusive procedures to gain access into the WDN and, (iii) their algorithms remain closed and publicly available blind benchmark tests have shown that the detection rates are quite low. The main objective of this thesis is to address each of the aforementioned three problems existing in current methods. First, a technology conducive to long-term monitoring will be developed, which can be deployed year-around in live WDN. Secondly, this technology will be developed around existing access locations in a WDN, specifically from fire hydrant locations. To make this technology conducive to operate in cold climates such as Canada, the technology will be deployed from dry-barrel hydrants. Finally, the technology will be tested with a range of powerful machine learning algorithms, some new and some well-proven, and results published in the open scientific literature. In terms of the technology itself, unlike a majority of technologies that rely on accelerometer or pressure data, this technology relies on the measurement of the acoustic (sound) field within the water column. The problem of leak detection and localization is addressed through a technique called linear prediction (LP). Extensively used in speech processing, LP is shown in this work to be effective in capturing the composite spectrum effects of radiation, pipe system, and leak-induced excitation of the pipe system, with and without leaks, and thus has the potential to be an effective tool to detect leaks. The relatively simple mathematical formulation of LP lends itself well to online implementation in long-term monitoring applications and hence motivates an in-depth investigation. For comparison purposes, model-free methods including a powerful signal processing technique and a technique from machine learning are employed. In terms of leak detection, three data-driven anomaly detection approaches are employed and the LP method is explored for leak localization as well. Tests were conducted on several laboratory test beds, with increasing levels of complexity and in a live WDN in the city of Guelph, Ontario, Canada. Results form this study show that the LP method developed in this thesis provides a unified framework for both leak detection and localization when used in conjunction with semi-supervised anomaly detection algorithms. A novel two-part localization approach is developed which utilizes LP pre-processed data, in tandem with the traditional cross-correlation approach. Results of the field study show that the presented method is able to perform both leak-detection and localization using relatively short time signal lengths. This is advantageous in continuous monitoring situations as this minimizes the data transmission requirements, the latter being one of the main impediments to full-scale implementation and deployment of leak-detection technology.