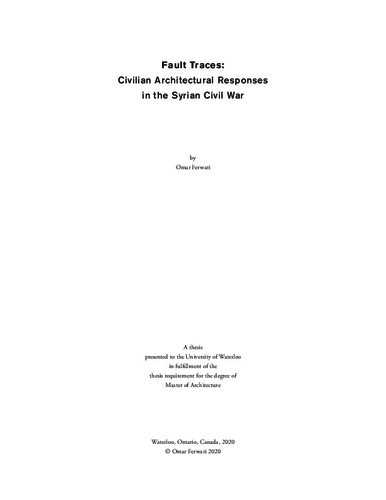 In the discourse of urban warfare, architecture normally has two roles: it is the object of destruction during fighting, and the object of reconstruction after conflict ends. There is little consideration for a third role of architecture: construction that happens in the heat of conflict. During the Battle of Aleppo (2012 – 2017) in Syria, combatants depended on the city to fight and in doing so radically transformed it. Combatants in Aleppo, like in most contemporary conflicts, created, targeted, and manipulated urban space for power. When the city transformed to both battlefield and weapon, its residents were at risk in their own homes and neighbourhoods. Contrary to our perception of civil society during crisis however, people in Aleppo were not just passive victims of war; they were active participants in shaping the city but for survival rather than power. I refer to this urban phenomenon as ‘civilian architectural response,’ where people must cope with violence by creating and changing the urban space around them. Their interventions in the city could be anything from building new structures, to altering existing ones, to creating new resource networks. Civilian architectural responses give necessary insight into the effects of war on civil society at the human scale, embody a new collective memory, and inform resilient visions of reconstruction. What makes Aleppo and other conflict cities today different from earlier wars is the ability for outsiders to peer into the place of conflict as it happens. Thanks to the contemporary ubiquity of phone cameras and social media, people document almost every act of war and broadcast it to the world. In that footage is an opportunity to fill the gap between our understanding of architecture as a target of destruction, and architecture as a project of reconstruction. In this thesis I investigate, document, and analyse civilian architectural responses in Aleppo during the Syrian Civil War. I consider each case from its materiality, to its urban environment, to its place in the conflict. I also outline a method based on forensics and crowd-sourced footage to conduct this analysis. I compose responses into three types: movement, civil space – where residents live – and infrastructure. Each section begins with a look at the violent, urban forces that threatened civil society followed by an account of the civilian architectural responses that resisted them.