The Economics of Water Conservation Regulations in Mining: An Application to Alberta's Lower Athabasca River Region 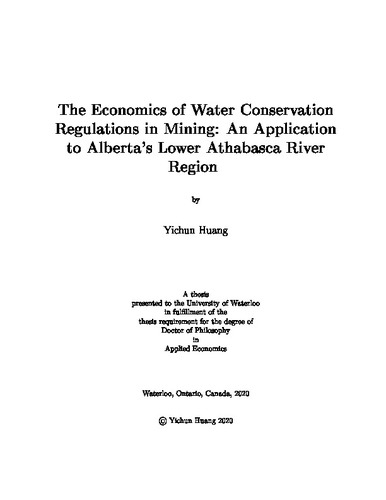 Large demands for water by the mining industry are of increasing concern around the world and access to water is seen as a significant constraint on future mine development. Citizens, environmental groups and other non-governmental organizations have called for better regulation of water consumption by the mining industry in many regions across the globe. This thesis analyzes the efficiency of a specific command and control water management policy in the Lower Athabasca River Region in Alberta, Canada applied to oil sands mining operations. This policy imposes different restrictions on water withdrawals from the river according to the severity of threat to the aquatic ecosystem due to low water levels. In developing the policy, the Alberta government focused on the potential environmental impacts of projected water use by the oil sands industry. Economic cost was considered only in terms of the cost to the oil sands industry of constructing water storage facilities. This thesis undertakes a more robust examination of economic cost by developing a stochastic optimal control model for an oil sands firm choosing production and water use rates, as well as the optimal timing to build a water storage facility. A Hamilton Jacobi Bellman equation is specified which incorporates uncertain oil prices as well as uncertain water flow volumes in the Athabasca River and a numerical solution is implemented using a finite difference approach. The price of oil is modelled as a log-mean reverting stochastic process. Uncertainty in river flows is captured by modelling the restrictions on water withdrawals as a regime switching stochastic process. The thesis estimates the economic cost of the restrictions in terms of the difference in value of the oil-producing asset with and without water restrictions. In Chapter 2, the model is used to analyze the Phase 1 water regulations, which were first applied in 2007. The Phase 1 regulations classified river water flows into green, yellow, or red zones with green implying abundant water and red implying reduced water flows. The water restrictions varied depending on river flow zone. In the thesis, the impact of these restrictions is captured by modelling the zones as different regimes with the probability of switching between regimes based on historical river flow data. The analysis also considers a number of cases in which the future river flow conditions are lower than those experienced historically. In Chapter 2, the total cost of the regulations is estimated as well as the marginal cost of increasing the water restrictions. For the Phase 1 restrictions, no information was available regarding the potential environmental benefits of the restrictions. Our conclusions show that the cost of the Phase 1 restrictions was quite small given the current reserve base and capacity of the industry. The chapter demonstrates how the marginal cost of tightening restrictions depends on the state variables, including resource stock and price. It is also shown that marginal cost is nonmonotonic with respect to price volatility. The marginal cost is shown to vary across individual oil sands projects depending on reserve levels and lease length. Chapter 3 undertakes an analysis of the Phase 2 regulations, implemented in 2015 as an update of the Phase 1 regulations. The development of the Phase 2 regulations was supported by a detailed scientific report (Phase 2 Framework Committee (P2FC) Report) outlining the likely environmental benefits of a suite of different water restrictions (rule sets) in terms of wetted area around the river. Wetted area was used as the indicator of ecosystem disturbance. The suite of water restrictions considered encompassed a much finer delineation of different water zones than in the Phase 1 regulations. The P2FC report presented an efficient frontier contrasting the effect on wetted area with the cost of water storage implied by the different restrictions. Based on their analysis the Committee chose one of the rule sets as the preferred option. This chapter uses the model developed in Chapter 2 to create a similar efficient frontier, comparing the change in wetted area with the economic cost to the oil sands. Assumptions regarding future river flows, operating costs, oil prices, future production and storage capacity and remaining established oil reserves are examined to determine their impact on the efficient frontier and the relative cost-effectiveness of the various options. The most important factors in determining the cost of the water restrictions are found to be the assumed storage capacity, cost of storage, projected river flow conditions, productive capacity and reserves. It is also found that given the significant growth of oil sands productive capacity assumed in the P2FC report, the recommended water restriction rule set is robust. However, for a smaller assumed growth in oil sands capacity, the proposed water restrictions impose very little cost on the oil sands industry. In this case, a different rule set would be recommended based on its better expected outcome in terms of maintaining the chosen ecosystem indicator. A key input to the analysis is the assumed model for oil prices. Chapter 4 applies different versions of the Kalman filter to estimate three one-factor stochastic models. The regime switching model turns out to outperform the other two single-regime models. However, the single-regime log mean-reverting model is judged to be adequate for the analysis in Chapters 2 and 3 and is preferred because it greatly reduces the complexity of the numerical computation and the interpretation of results.