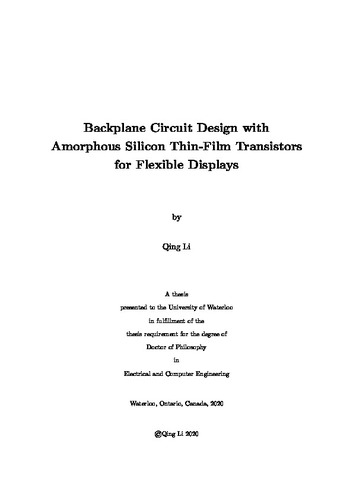 In recent years, rapid advancement in LED fabrication has enabled the possibility of using GaN micro-LEDs to be the light media in a display panel. It has superior performance in many aspects when compared with OLED technology, such as high contrast, wide viewing angle, and low power consumption. These advantages have enabled a possibility of using micro-LED technology to realize flexible displays. Currently, OLEDs need high mobility low-temperature-poly-silicon (LTPS) TFTs to be the backplane driving circuit material because lower mobility TFTs are inadequate to drive OLEDs. However, LTPS TFTs have poor uniformity over a large area due to unpredictable grain sizes and require additional fabrication processes which prevent it from being integrated onto a large-area flexible platform. On the other hand, conventional amorphous silicon (a-Si:H) technology used on LCD panels have an edge in terms of uniformity over large-area and low-cost fabrication. Even though the field-effect mobility of a-Si:H TFTs is much less than LTPS technology, it is sufficient to power up micro-LEDs with decent pixel density, which is impossible with OLEDs. However, the nature of amorphous materials gives rise to electrical instability issues. The output current of a-Si:H TFTs gradually decreases over time under electrical stress, which results in dimmer micro-LEDs in pixels. Moreover, the lack of complementary p-type TFTs in a-Si:H limits the integration of driver and control circuits onto the flexible platform to realize a full "system-on-flex". To overcome such shortcomings of a-Si:H technologies, this thesis makes a contribution in providing a solution to compensate the output current degradation by a novel pixel circuit with simple control scheme, as well as bootstrapped logic circuits that can be used as row driver and control circuits on flexible substrates. The proposed compensation pixel and row driver circuits can be combined to facilitate the realization of a "system-on-flex" backplane for a display panel with a-Si:H and micro-LED technologies.