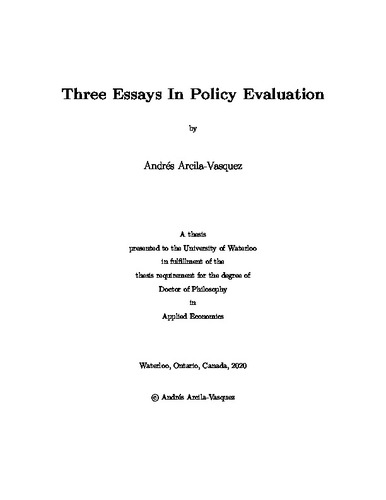 This thesis consists of three chapters that study the effect of public policy on several economic and environmental outcomes. In the first chapter, we investigate the effect of a change in tax policy affecting cars on car pollutant emissions. We construct a data set on emissions using the COPERT 4 model, which was developed by the European Environmental Agency and is now widely used in environmental engineering to estimate emissions. The new tax impacted high cylinder vehicles with engine sizes larger than 3 liters while taxes on small cylinder cars remained unchanged. The COPERT model uses general information about infrastructure and certain driving conditions to calculate total emissions by engine size. We use a difference in difference methodology and exploit the variation introduced by the policy that differentially affected cars with larger engines. By imposing a tax on larger engines, the share of these in the market should decrease while the other group should increase, therefore decreasing the emissions by the treated group. Our results showed that Particulate Matter and Carbon Monoxide emissions decreased by around 11%, while Volatile Compound and Nitric Oxide decreased by roughly 7%. These results are robust to the inclusion of province fixed effects, economic conditions and specific trends by province, different engine size trends as well as contamination by other possible policies. In the second chapter, I use confidential micro files from the Canadian Labour Force Survey from 1994 to 2015 to assess whether the 2001 Quebec's affordable childcare policy changed the distribution of employment by occupation. In general, I found that the policy tended to reduce the concentration of male dominated occupations and increased the concentration of female dominated and gender balanced occupations. Comparing results at different levels of aggregation suggest that there were many occupational changes within the 3-digit occupation categories. These intra-occupational movements were likely driving the concentration of gender balanced occupations, whereas increased concentration in female dominated occupations was likely driven by inter-occupational movements from male dominated or gender balanced occupations. Further, I report less concentration of high-pay occupations and occupations requiring high levels of cognitive or social skills, but also lesser concentration in occupations requiring high levels of physical skills, after the policy. These effects tend to persist in the long run. This exercise highlights the need to further investigate the distributional effects of the child care policy. The third chapter is closely tied to the second chapter. Here, we use the same change in childcare policy to understand its effect on the overall skill distribution of jobs. We use newly developed methods to test for stochastic and Lorenz dominance and assess whether the distribution of skill requirements in occupations in Quebec is different before and after the policy relative to changes in the distribution of skills in the Rest of Canada. We complement this analysis by calculating Quantile Treatment Effects using a propensity score re-weighting technique to measure these differences across the distributions. Our results suggest that the distribution of the interpersonal, physical, visual and fine motor skills index in Quebec stochastically dominates the distribution of skills in the rest of Canada in 1994, whereas in 2004 the dominance is reversed. On the other side, the distribution of the analytical skill index in Quebec dominates the one for the rest of Canada in both years. The estimation of Quantile Treatment Effects strengthens these results by showing that the largest changes in the analytical skill index happened in occupations at the median ability level.