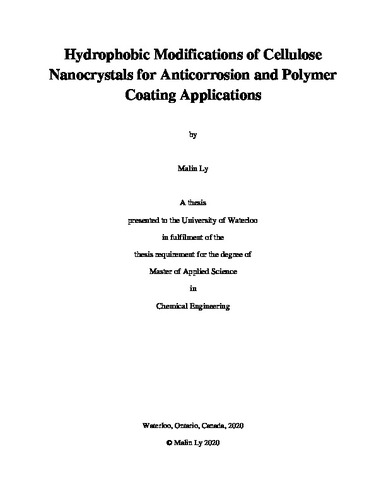 Cellulose nanocrystal (CNC) is a robust, renewable and green nanorods, which has a potential as an excellent reinforcing and multi-functional filler for polymers used in coating and other applications. CNC contains abundant surface hydroxyl (-OH) groups, making it highly polar and hydrophilic nanomaterial. As a result, its interfacial interaction and dispersibility in several non-polar polymers, such as epoxy and polyurethane, is limited. These limitations severely constrain it from transferring its intrinsic properties (e.g. loading bearing capabilities) to polymeric materials. The main goal of this thesis was to investigate the surface chemical modifications of CNCs with hydrophobic molecules to enhance its compatibility with epoxy and polyurethane matrices for coating applications. In the first part of the study, ammonium cationic surfactant modified CNC was produced. First, the -OH group of CNC was oxidized to carboxylic CNC using 2,2,6,6-Tetramethyl-1- piperidinyloxy (TEMPO) as a catalyst. Then, three differentiated cationic ammonium surfactants: cetyltetramethylammoniumbromide (CTAB, C16 single chain), dimethyldidodecylammonium bromide (DDAB, C12 double chains), and dimethyldihexadecylammonium (DHAB, C16 double chains) were used to modify the surface of carboxylate CNCs. The modifications were confirmed using Fourier-Transform Infrared Spectroscopy (FTIR) and elemental analysis. X-ray diffraction (XRD) and thermogravimetric analysis (TGA) of the samples revealed that the crystallinities and the thermal stabilities of the modified CNCs were preserved. Corrosion protection studies of epoxy nanocomposite coatings containing the native and surfactant modified CNCs were conducted using model steel specimens via salt spray and electrochemical test methods. The results indicated that the use of surfactant modified CNCs resulted in an enhanced dispersibility in the epoxy matrices as compared to native CNCs. The improved dispersion assisted in retardation of the penetration of electrolyte that caused a remarkable improvement in the metal corrosion protection performance, as compared to unfilled or native CNC filled epoxy coatings. The second investigation focused on the modifications of CNCs for polyurethane polymer coating. It involves surface grafting of varying levels of epoxy functionalized silane (ES) on surface of CNCs. The effect of reaction time and concentration of ES on the level of grafting were also investigated. The level of modifications was evaluated using Fourier Transform Infrared Spectroscopy (FTIR), Elemental analysis (EA), X-ray photoelectron spectroscopy (XPS), water contact angle measurement (WCA) and dispersibility test. It was found that prolonged reaction time and high mole ratio of ES to CNC improved the thermal properties and material wettability of the modified CNC. The highest modified sample has WCA of 72.5º as compared to 25.6º for CNCs. The incorporation of modified CNC in polyurethane not only improved mechanical properties but also reduced the water absorption properties of the PU composites, which could be attributed to the improvement in the dispersion and enhanced interfacial adhesion between the nanoparticle and the PU matrix. Salt spray and electrochemical impendence spectroscopy (EIS) study that were carried out on mild steel coated with PU/ES-CNC nanocomposite exhibited excellent corrosion protection against salt solution compared to pure polyurethane. As a result of these two studies, knowledge of modification of CNC through cationic surfactant and epoxide functionalized silane agent have been advanced. The tailoring of CNC surfaces via a facile and green process that maintained their desired crystallinity and nanostructure while enhancing their compatibility with hydrophobic polymer matrices could further expand their application in several advanced multi-functional material platforms.