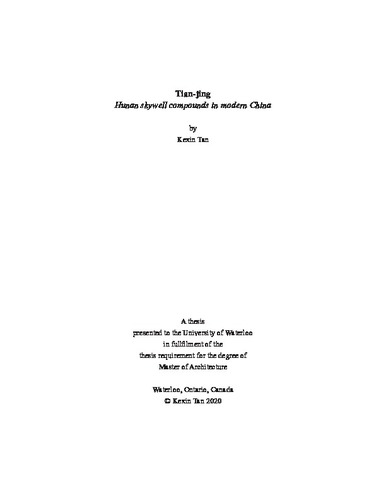 Tian-jing, or skywell, is a small courtyard that is both an interior and an exterior space. It is an interstice which both disconnects and joins the surrounding chambers. The opening acts as a conduit for the heavens within the introspective Chinese compounds. In plan, courtyards supplant the use of corridors; repeated use of Tian-jings could bridge together hundreds or thousands of rooms within one outer wall. My undergraduate architecture studies in Canada highlight the narrative of building architecture, and the delivery of designs in definite drawings; we learn to compose a building from abstract perimeters, and develop a language to narrate the promised vision. Canada is a nation with relatively new architectural history; architects deal with design issues with code or programming with control and order. In practice, we design for the object architecture or the urban master plan. In comparison, the Tian-jing compounds in Hunan, China had experienced radical societal shifts in the last hundred years. Although many Tian-jing compounds did not survive the Land Reform Movement and the Cultural Revolution, some persevered through forbearance, and adapted into the new age. Old Tian-jing compounds that belonged to a single family for multiple generations became divided, and the new users made their own modifications onto the old architecture. The ambition of this research aims to remove the temporal obstacles of history and relinquish the cultural and architectural value of a lost architectonic typology. Moreover, this research looks at architecture built in a pre-existing environment of embodied knowledge. I investigated and documented eight different Tian-jing complexes in varying scales and states of preservation in Hunan, China. Through a series of photographs and journals, I analyse my field observations and reflect on the Tian-jings and its associated buildings. My journey through the eight case studies finds architecture in the intermediate state between the building and the city. Instead of a singular structure stealing the spotlight, groups of buildings interact and blend together, creating an expansive tapestry weaving with knits and holes. Tian-jing compounds present architecture not as objects but a piece of nature; it is an institution of trees and clearings within a larger matrix of forests.