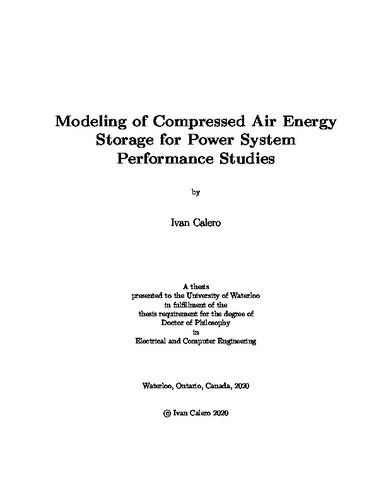 In the effective integration of large renewable generation for grid scale applications, pumped-storage hydro and Compressed Air Energy Storage (CAES) are currently economically and technically feasible alternatives to properly manage the intrinsic intermittency of energy sources such as wind or solar, with CAES being less restrictive in terms of its location. Furthermore, the relative fast response, and the possibility of physically decoupling the charging and discharging drive trains interfacing the grid through synchronous machines make CAES a suitable asset to provide ancillary services in addition to arbitrate, such as black start, spinning reserve, frequency regulation, and/or voltage regulation. Nevertheless, although the economic value of CAES having multiple stream revenues has been studied in the context of planning and operation of power systems, the actual impact of CAES facilities on the electrical grids have not been properly addressed in the literature, in part due to the lack of suitable models. The existing CAES models proposed for power system studies fail to represent the dynamics, nonlinear relations, and physical restrictions of the main mechanical subsystems, by proposing simplifications that result in unrealistic dynamic responses and operating points when considering the entire CAES operating range, as is required in most ancillary services or during grid disturbances. Furthermore, the detail of these models and the controls used are inconsistent with the state-of-the-art modeling of other storage technologies such as batteries and flywheels. Hence, in order to bridge the gap in CAES modeling and control, this thesis propose a comprehensive physically-based dynamic mathematical model of a diabatic CAES system, considering two independent synchronous machines as interface with the grid, which allows simultaneous charging and discharging of the cavern, such as the recently inaugurated 1.75 MW CAES plant in Goderich, Ontario. Detailed and simplified models are proposed based on the configuration of the Huntorf plant, in Germany, which is one of the only two existing large CAES facilities currently operating in the world. The system modeled comprises a multi-stage compressor with intercoolers and aftercooler, driven by a synchronous motor in the charging stage, an underground cavern as storage reservoir, a multi-stage expander with a recuperator and reheater between stages, and a synchronous generator in discharging mode, such as the aforementioned small CAES Ontario plant. The proposed thermodynamic-based dynamic models of the compressors and expanders allow calculating internal system variables, such as pressures, temperatures and power, some of which are used as controllable variables. Furthermore, different approximations to model the nonlinear relations between mass flow rate, pressure ratio, and rotor speed in the CAES compressors and expanders, determined by so called “maps”, are proposed based on Neural Networks and physically-based nonlinear functions; these constrain the operation of the turbomachinery, but are usually ignored in existing models. A control strategy for active and reactive power of the CAES system is also proposed. The active power controller allows primary and secondary frequency regulation provision by the turbine and compressor. Special controllers are proposed to restrict the charging and discharging power of the turbine and compressor, to avoid pressure ratios that violate the restriction imposed by the cavern pressure. A surge detection controller for the compressor, and a controller that regulates the inlet temperature at each expansion stage are also presented, and these controls are complemented by a state of charge logic controller that shuts down the compressor or turbine when the cavern is fully charged or runs out of air, respectively. A coordinated droop-based reactive power control is also proposed for the parallel operation of the two synchronous machines, which is used to provide voltage regulation assuming both machines operate synchronized with grid. Finally, the implementation of a block-diagram based CAES model for transient stability studies in the DSATool’s TSAT® software is presented, based on a generic model architecture of the different CAES system's components and their interrelations. The performance of the proposed models, with different levels of detail, are examined in various electrical system studies. First, the potential of a CAES system to provide primary and secondary frequency regulation in a test power system with high penetration of wind generation is evaluated in Simulink®, where the proposed CAES models are also compared with existing models. The voltage regulation, oscillation damping capability, and frequency and transient stability impact of CAES are also studied in a modified WSCC 9-bus test system using TSAT®. It is demonstrated that CAES is more effective than equivalent gas turbines to regulate frequency and voltage and damp low frequency oscillations, with the simultaneous charging and discharging operation significantly reducing the frequency deviation of the system in the case of large power variations in a wind farm. Furthermore, the effects on the overall frequency regulation performance of incorporating detailed models for some of the CAES components, such as expansion air valve, compressor and turbine maps and associated controls is also assessed, demonstrating how modeling these sub systems restricts the CAES response, especially in charging mode. Finally, the effect of the stage of charge control on the frequency stability of the system for different cavern sizes is investigated, concluding that if the power rating of the CAES system is large enough, small cavern sizes may not allow proper provision of frequency regulation.