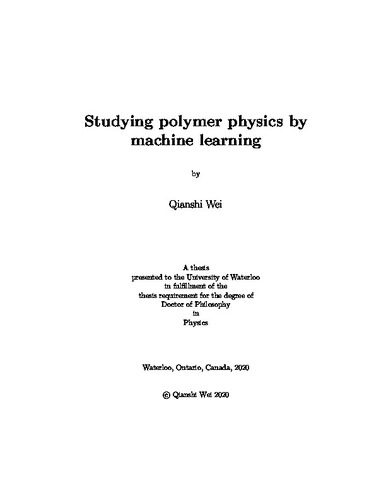 Recently, machine learning becomes a computational method that burst in popularity. Many disciplines, such as condensed matter physics, quantum chemistry, chemical engineering as well as polymer physics have incorporate machine learning into their studies. This thesis mainly focuses on applying machine learning methods into the study of polymer physics. More specifically, two computational methods are studied: 1. how to classify polymer states by supervised or unsupervised learning methods, 2. how to use FNNs to search for structures of diblock copolymer under self-consistent field theory scheme. In the first topic, polymer samples that consist of both vastly different structures, such as gas-like random coil, liquid-like globular and subtly different structures, such as crystalline anti-Mackay, Mackay, are generated by Monte Carlo method. We then explored the capability of a FNN on the classification of different polymer configurations systematically. Base on a series of numerical experiments, we find that a FNN, after appropriate training, is able to not only identify all these structures, but also accurately locate the transition points between multiple states. The location given by the FNN has a good agreement with that provided by specific-heat calculations from the traditional method, which shows that the FNN offers a new tool for further studies of the polymeric phase transitions. We also studied these states with principal component analysis (PCA). When polymer samples only contain coil and globular states, PCA can distinguish these states, and offer insights to understand the relation between features and order parameters of these states. However, PCA itself is not powerful enough to distinguish globular, anti-Mackay, Mackay states. Then, a hybrid scheme combining PCA and supervised learning is utilized to identify and precisely detect the critical point of phase transitions between these polymer configurations. Compared with traditional methods, our studies demonstrate machine learning based methods have some distinct advantages. Firstly, these methods directly and only use molecular coordinates, which indicates its high compatibility with multiple sampling methods. In addition, the trained FNN has high transferability. In terms of identify transition points, our approaches requires much fewer samples, which indicates they are computationally faster than the traditional methods. In the second topic, we start from using the universal approximation theorem of FNN to build a machine learning based PDE solver. Our work mainly focuses on diffusion equations. This algorithm utilizes the function generated by the FNN as a trial function and adjusts the weights and biases of the FNN to search for the solution of a given PDE. The trial function will have a good match with the solution, when the weights and biases are optimal. Our approach is important to high dimensional diffusion equations. We discovered that the growth of the computational time obeys a power law with respect to the dimensionality, which indicates that the machine learning based solver offers a candidate algorithm that may not suffer from the ``curse of dimensionality''. We then demonstrated that this machine learning PDE solver can be conveniently adopted to deal with multi-variable, coupled integrodifferential equations in the self-consistent field theory for predicting polymer self-assembly structures. We observed all known three-dimensional classical structures, and our solutions have an excellent agreement with traditional solutions.