Modelling, Control, and Planning of Microgrids for Power Quality Assurance 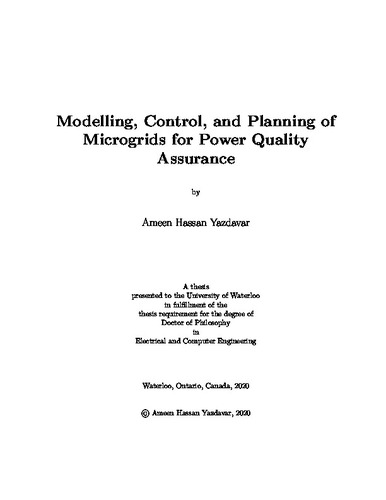 This thesis considers power quality improvement for microgrids penetrated with nonlinear loads at two levels: 1) at the device level, which is carried out through the distributed generators’ (DGs’) controllers on a decentralized basis; and 2) at the system level, in the microgrid planning, taking into account the specific features of microgrids, including the lack of a slack bus, droop-based operation of some DGs, and necessity of voltage support provision. Moreover, given that modelling is an inherent part of power quality studies, the thesis focuses on modelling at two levels: 1) at the device level, in the modelling of nonlinear loads and generators that are commonly used in microgrids; and 2) at the system level, in developing a harmonic power flow algorithm suitable for islanded microgrids to quantify the flow of harmonics as well as voltage distortions. One of the microgrid basic control objectives is to uniformly distribute the loads among different the DGs. For nonlinear loads, their non-fundamental powers should also be evenly shared along with active and reactive powers. The sharing of nonlinear loads among the DGs is always a trade-off between accuracy and voltage quality. The first research point considers a virtual harmonic conductance for each harmonic, as a family of droop characteristics in terms of conductance versus current. Assigning a variable conductance for each harmonic current improves DGs' controllability, thus offering accurate nonlinear load sharing, which is crucial at the near-rated loading, in addition to enhancing the voltage quality. The proposed method also unveils a tuning methodology for the droop characteristics that sets a maximum permissible value for each individual harmonic to comply with international standards. Lastly, a hybrid voltage and current control system is suggested to accurately track the DGs' harmonic conductances designated by the proposed droop characteristics. While the proposed algorithm is capable of accurately distributing common nonlinear loads among DGs, it also enjoys the advantage of supplying local nonlinear loads by their dedicated DGs. As the second research point, the thesis presents a planning platform that simultaneously determines the locations and sizes of DGs and capacitor banks (CBs) for isolated microgrids with a high penetration of nonlinear loads. The proliferation of nonlinear loads along with the capacitors of CBs or DGs' output filters that are distributed throughout microgrids may cause quasi-resonance and severe voltage distortions. Because these issues are affected by the locations and sizes of DGs and CBs, a harmonic analysis should be considered in the planning. For that purpose, a harmonic power flow tool tailored for planning applications is developed that takes into consideration the specific features of isolated microgrids. Given the necessity of supply continuity for isolated microgrids following a contingency, and the fact that frequency and voltage provision cannot be provided by renewable DGs, a reliability constraint has been added to the planning algorithm. This constraint increases the probability of building successful islands, and results in a better distribution of dispatchable DGs throughout microgrids. Developing an effective harmonic power flow tool requires fast and accurate calculations of the harmonics generated by nonlinear elements. As the third research point, the thesis presents a time domain-based method for obtaining all steady-state characteristic and non-characteristic harmonics generated by three-phase diode bridge rectifiers, under unbalanced and distorted supply. The developed model is generic and able to address both continuous- and discontinuous-conduction modes with a single formulation. By introducing a virtual resistance on the rectifier's DC side, the model is extended to accommodate any DC-side filter. Further, a unique analytical Jacobian matrix is developed to guarantee a quadratic convergence for the iterative part of the proposed method. The effectiveness of the proposed method for harmonic analysis is confirmed through a comparative evaluation with time-domain simulations using PSCAD/EMTDC. As the fourth research point, the thesis proposes an accurate harmonic power flow algorithm for islanded microgrids, taking into account their specific features, i.e., the droop-based operation of DGs, lack of a slack bus and the fact that islanded microgrids are based on voltage-controlled DGs. The algorithm is a sequential one that repeats fundamental and harmonic power flow algorithms in sequence until convergence is achieved. The fundamental power flow takes into account the fact that islanded microgrids are formed based on voltage-controlled DGs, as well as the droop-based operation of these DGs. On the other hand, the harmonic power flow is based on Nodal analysis in which the microgrid's nonlinear loads constitute its current source vector and the rest of the elements are modelled within its admittance matrix. The model used for nonlinear loads considers the mutual interactions of different harmonics. The model for voltage-source-converter interfaced DGs is based on a transfer function technique, and allows incorporating different control layers. The effectiveness of the control algorithm has been proven through comparative studies with time domain simulations.