An Urban Morphology Analysis of Urban Innovation Districts in Canada 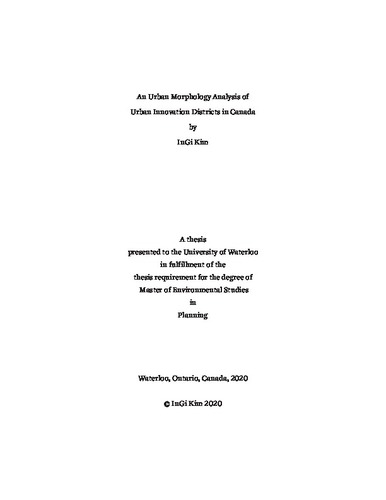 Since the economic transition towards a knowledge-based economy in the 1990s, technological innovation has been an essential driver of economic growth and development. As a reaction to such phenomena, Urban Innovation Districts (UIDs) are becoming a new urban strategy used to raise a city’s innovation profile. The concept of UIDs is one of the most recent developments within an extensive collection of literature on the rise of the creative economy, creative classes, and the clustering of creative industries in urban areas. However, academic research on UIDs has focused on their economic implications but fail to analyze them physically. The following research question drove this study: “What are the place characteristics that distinguish UIDs, and how does urban morphology influence the formation of such characteristics?”. This study addressed the concerns of many writers and scholars in terms of the lack of form and space quality in local development plans. Thus, it became important to evaluate and investigate the relationship between physical urban form and the characteristics of a place. A broad body of literature in the field suggests that the industries associated with UIDs are sensitive to the characteristics of a place. Several studies have proved that high tech and start-up activities are shifting toward mixed-use, transit-oriented, walkable urban centres. This study employed multiple-case studies as an explanatory tool to describe how place characteristics of UIDs — compactness, mixed-use development, and connectivity — were influenced by morphological elements of an urban form. This study analyzed and compared UIDs across Canada using a morphological method known as the “British School”, along with the scientific approach to investigate urban form empirically. The principal value of this study was its comparative nature. Through the analysis of multiple-case studies, it developed a sharpened understanding of the concept of UIDs in the Canadian context; not only as a branding initiative, but as a thriving urban strategy that creates an attractive urban fabric promoting economic growth and social interaction. This study also contributed to forging a better theoretical and conceptual understanding of how urban morphology could be incorporated into the placemaking process by revealing how physical form affected the characteristics of a place.